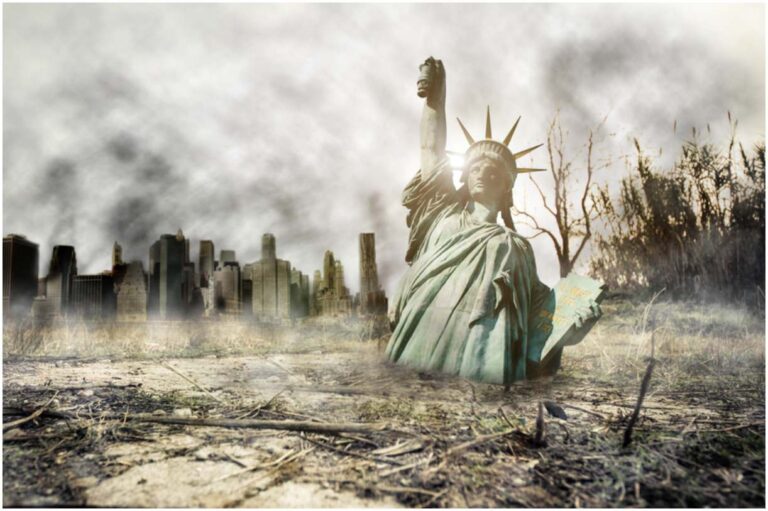 List Of 20 Movies About The End Of The World:

”Take Shelter” is a psychological thriller drama film that tells the story of a young husband and father who is plagued by several apocalyptic visions.

The film stars Jessica Chastain and Michael Shannon. It was written and directed by Jeff Nichols.

”Sunshine” is an SF psychological thriller film about a group of astronauts on a mission to reignite the dying Sun.

”Cloverfield” is a monster film that follows five NYC residents fleeing from a massive monster. It is the first film in the Cloverfield franchise.

It was written by Drew Goddard and directed by Matt Reeves.

”Childhood’s End” is a TV miniseries that is set after a peaceful alien invasion.

Some of the stars are Charles Dance as Karellen, Mike Vogel as Ricky Stormgren, Georgina Haig as Annabelle Stormgren, Yael Stone as Peretta Jones, Daisy Betts as Ellie Stormgren, and Osy Ikhile as Milo Rodericks.

Childhood’s End is based on the 1953 novel of the same name by Arthur C. Clarke.

”28 Days Later” is a post-apocalyptic horror film that is set in a world where a highly contagious virus was released.

”Deep Impact” is an SF disaster film that depicts the attempts to prepare for and destroy a 7-mile wide comet set to collide with Earth.

”I Am Legend” is a post-apocalyptic action thriller film set in NYC after a virus has wiped out most of mankind.

It earned more than $585 million worldwide. The film was directed by Francis Lawrence and it is based on the 1954 novel of the same name by Richard Matheson.

”The Happening” is an apocalyptic thriller film about a family who struggles to survive a plague that causes those infected to commit suicide.

The film grossed $163 million worldwide against its $48 million production budget. It is written, co-produced, and directed by M. Night Shyamalan.

”Daybreakers” is an SF action horror film set in a futuristic world overrun by vampires.

”The Rapture” is a drama film that centers on a young woman who converts a born-again Christian after learning that a true Rapture is upon the world.

”Io” is an SF film set in a post-apocalyptic present, where Earth’s atmosphere has become toxic.

The film stars Danny Huston, Anthony Mackie, and Margaret Qualley. It is directed by Jonathan Helpert.

”These Final Hours” is a sci-fi apocalyptic thriller film that follows a young man who makes his way to the party-to-end-all-parties on the last day on Earth.

The film stars Angourie Rice and Nathan Phillips. It was written and directed by Zak Hilditch.

”When the Wind Blows” is an animated disaster film that tells the story of a rural English couple’s attempt to survive a nearby nuclear attack.

The soundtrack album features music by David Bowie. It stars the voices of Peggy Ashcroft and  John Mills. The film is based on Raymond Briggs’ comic book of the same name.

”I Am Mother” is an SF thriller film that focuses on a girl in a post-apocalyptic bunker.

It stars Hilary Swank, Rose Byrne, Luke Hawker, and Clara Rugaard. The film is based on a story by Michael Lloyd Green and Grant Sputore.

”The Book of Eli” is a post-apocalyptic action film that follows a nomad who is told by a voice to deliver his copy of a mysterious book to a safe location.

The film stars Jennifer Beals, Ray Stevenson, Mila Kunis, Gary Oldman, and Denzel Washington. It was written by Gary Whitta and directed by The Hughes Brothers.

”The Wandering Earth” is a 2019 Chinese SF action film about a group of astronauts guiding the Earth away from an expanding Sun.

The film is China’s third highest-grossing film of all time – more than $700 million.

”The Sacrifice” is a drama film that tells the story of a man who attempts to bargain with God to stop an impending nuclear holocaust.

The film won the Grand Prix at the Cannes Film Festival.

”The Day After Tomorrow” is an SF disaster film about a paleoclimatologist who believes that a new Ice Age is imminent.

The film is based on the book The Coming Global Superstorm by Whitley Strieber and Art Bell.

”The Quiet Earth” is a post-apocalyptic SF film that centers on three survivors of a cataclysmic disaster.

”Independence Day” is an epic SF action film set in the aftermath of a worldwide attack by an extraterrestrial race.

READ THIS NEXT: Movies about Death