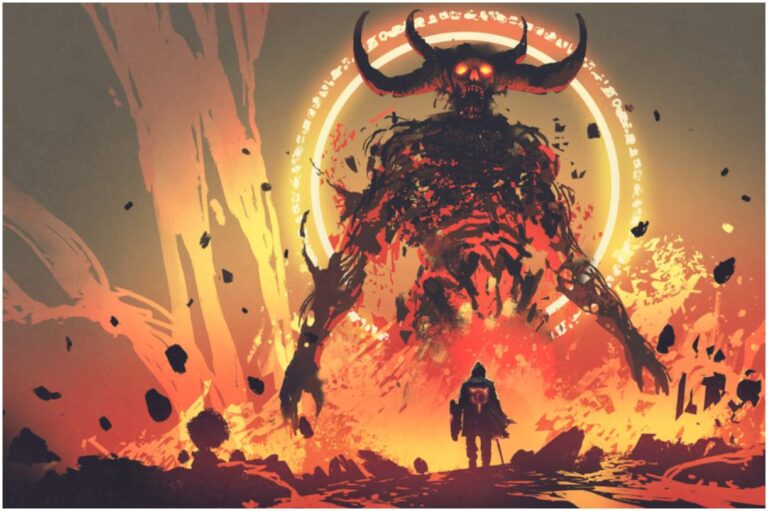 List of 20 Movies about the Devil, Hell, and Demons:

‘Constantine’ portrays John Constantine (Keanu Reeves) as a cynic with the ability to perceive and communicate with half-demons and half-angels in their true form.

Hellboy follows a demonic beast-turned (Ron Perlman) superhero who works to keep the world safe from paranormal threats. The film is based on the Dark Horse Comics graphic novel Hellboy: Seed of Destruction by Mike Mignola.

In The Ninth Gate, Dean Corso (Johnny Depp) tries to authenticate an ancient book that purportedly contains a magical secret for summoning the Devil. It grossed over $58 million worldwide.

The film is based upon Arturo Pérez-Reverte’s 1993 novel The Club Dumas. It was directed, produced, and co-written by Roman Polanski.

The Devil’s Advocate, based on Andrew Neiderman’s novel of the same name, is about a successful young lawyer (Keanu Reeves) who is invited to NYC to work for a major firm. Other stars in the film are Charlize Theron and Al Pacino.

‘Hellraiser’ follows the resurrection of Frank (Sean Chapman), who had opened the door to an alternate dimension. It marked Clive Barker’s directorial debut. The film is based on Barker’s novella The Hellbound Heart.

‘Legion’ plot takes place after God loses faith in mankind and orders Archangel Michael to bring the Apocalypse to Earth and exterminate the human race.

‘Drive Angry’ is about John Milton who hunts down a gang of worshipers of a satanic cult trying to find where their leader Jonah King is. Jonah King has also murdered Milton’s daughter and kidnapped her baby.

It was written and directed by Roman Polanski.

‘Drag Me to Hell’ is about a loan officer who evicts an old woman from her home. In retaliation, the evicted woman places a curse on the loan officer.

‘Hereditary’ chronicles a family haunted by a mysterious presence after the death of their secretive grandmother. Stars in the film include Gabriel Byrne, Milly Shapiro, Alex Wolff, and Toni Collette.

The film was written and directed by Ari Aster.

‘Angel Heart’ follows a New York City private investigator (Mickey Rourke) who is hired to solve the disappearance of a man known as Johnny Favorite. Other stars in the film are Charlotte Rampling, Lisa Bonet, and Robert De Niro.

It was written and directed by Alan Parker.

‘Spawn’ chronicles the murder of soldier Al Simmons who is resurrected as Spawn, the reluctant, demonic leader of Hell’s army.

‘The Conjuring’ is about paranormal investigators and authors who help a family who is experiencing disturbing events in their farmhouse in Rhode Island.

The film was written by Carey W. Hayes and Chad Hayes, and directed by James Wan.

‘The Exorcism Of Emily Rose’ is about a lawyer who takes on a negligent homicide case involving a priest who performed an exorcism on a young girl.

It stars Tom Wilkinson and Laura Linney and was directed by Scott Derrickson.

READ MORE: Does Empathy Have A Dark Side?

‘The Gate’ is about two young boys who accidentally release a horde of demons. It was directed by Tibor Takács.

‘The Prophecy’ chronicles the story of the Archangel Gabriel (Christopher Walken) and his search for an evil soul on Earth. It was written and directed by Gregory Widen. Other stars in the film are Viggo Mortensen, Eric Stoltz, Virginia Madsen, and Elias Koteas.

‘The Devil Inside’ tells the story of a woman who becomes involved in a series of exorcisms during her quest to determine what happened to her mother.

The film was written by Bell and Matthew Peterman, and directed by William Brent Bell. Some of the stars are Suzan Crowley, Evan Helmuth, Simon Quarterman, and Fernanda Andrade.

‘Jigoku’ is about a young student’s life who spirals into the evils of hellfire after he meets a young man. The film stars Shigeru Amachi and Utako Mitsuya. It was directed by Nobuo Nakagawa.

READ THIS NEXT: Movies About Heaven & The Afterlife