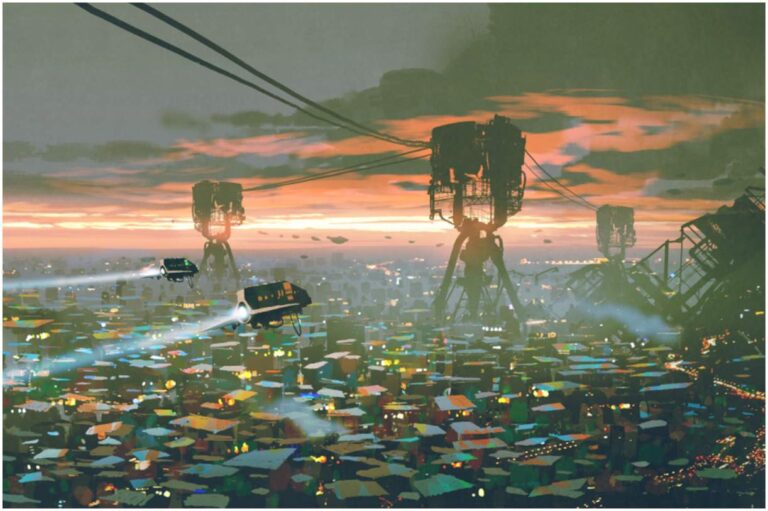 The action in ”Snowpiercer” takes place aboard a train that is carrying the last remnants of humanity after a failed attempt at climate engineering to stop global warming.

It was written by Bong Joon-ho and Kelly Masterson, and directed by Bong. The film grossed more than $86 million worldwide.

The plot of ”Children of Men” takes place in 2027, when 20 years of human infertility have left society on the brink of collapse. Clive Owen plays civil servant Theo Faron.

The screenplay is based on P. D. James’ 1992 novel The Children of Men.

”Dark City” follows an amnesiac man who attempts to discover his true identity while on the run from a group known as the “Strangers.”

The screenplay was written by David S. Goyer, Lem Dobbs, and Proyas.

”The Giver” is about a young boy, Jonas, who lives in a seemingly perfect community, without pain, suffering, war, differences, or choice. However, he later becomes public enemy number one.

”Equilibrium” follows an enforcement officer (Christian Bale) in a future in which feelings and artistic expression are outlawed and citizens take daily injections of drugs to suppress their emotions.

Other stars in the film are Taye Diggs and Emily Watson.

”12 Monkeys” is about a prisoner of the state in the year 2035 (James Cole) who can earn parole if he agrees to travel back in time and thwart a devastating plague.

The story of ”The Hunger Games” takes place in a post-apocalyptic future where a girl and a boy from each of the nation’s 12 Districts are chosen annually and forced to compete in an elaborate televised fight to the death.

”A Quiet Place” follows a family who struggles to survive in a post-apocalyptic world inhabited by blind extraterrestrial creatures.

”The Truman Show” chronicles the life of Truman Burbank (Jim Carrey) who grew up living an ordinary life which is actually a large set populated by actors for a TV show about him.

”The Matrix” centers on an average computer programmer (Thomas A. Anderson) who is also a hacker known as Neo by night who has always questioned his reality.

It stars Hugo Weaving, Joe Pantoliano, Carrie-Anne Moss, Laurence Fishburne, and Keanu Reeves. The film was written and directed by the Wachowskis.

”Idiocracy” is sent in a dystopian world where society is devoid of such traits as human rights, justice, social responsibility, or intellectual curiosity. In this twisted world, mankind has embraced anti-intellectualism, and commercialism has run rampant.

The film was co-written by Judge and Etan Cohen.

”V for Vendetta” is a 2005 dystopian political thriller action film that centers on an anarchist who attempts to ignite a revolution through elaborate terrorist acts.

”Mortal Engines” is set in a post-apocalyptic world where entire cities have been mounted on wheels and motorized.

It is based on the 2001 novel of the same name by Philip Reeve. Some of the stars are Stephen Lang, Patrick Malahide, Leila George, Ronan Raftery, Hugo Weaving, Jihae, Robert Sheehan, and Hera Hilmar.

”The Purge” is a dystopian horror film about a wealthy family that is held hostage for harboring the target of a murderous syndicate during the Purge – a night when all crime is legal.

The action in ”Gattaca” takes place in a society driven by eugenics where potential children are conceived through genetic selection.

”Mad Max: Fury Road” is set in a post-apocalyptic desert wasteland where water and petrol are scarce commodities.

”Alita: Battle Angel” is about a cyborg who awakens in a new body with no memory of her past.

The film is produced by James Cameron.

”Never Let Me Go” follows the lives of three friends, from their early school days into young adulthood.

The film had a production budget of $15 million.

”Divergent” is a dystopian science fiction action film set in a world where people are divided into distinct factions based on human virtues.

READ THIS NEXT: Movies about Ghosts and Hauntings