Astral projection (or astral travel) occurs when the mind leaves the physical body and is free to roam around the astral plane.

The astral plane is the world where spiritual communication happens on a very profound level, and profound spiritual development comes far easier and faster than it does in a normal state of mind.

It is the collective of thought, the realm of understanding.

The silver cord has been described as being smooth, very bright, very long, like an elastic cable made of light, approximately 1 inch wide.

In astral travel, you remain attached to your physical body by a ”silver umbilical type cord.” Some travelers in this world are able to see the silver cord when astral projecting. If the cord is broken, you are killed, physically and astrally. 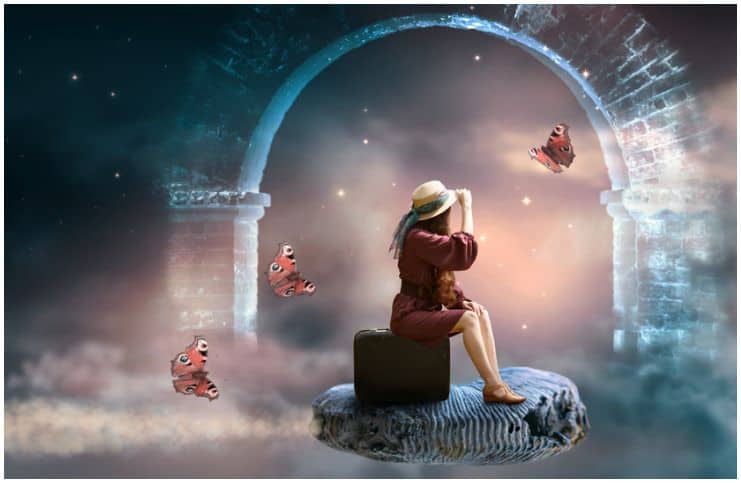 People usually experience this state during illness, when involved in a near-death experience, but it is also possible to enter the astral plane at will, during a lucid dream or in deep meditation.

In addition, some people have reported perceptions similar to descriptions of astral travel that were induced through various hallucinogenic (LSD or ayahuasca) and hypnotic means.

There are 2 general schools of thought on the nature of astral travel:

Similar concepts of soul travel appear in many religious and spiritual traditions.

For instance, ancient Egyptian teachings present the soul as having the capacity to hover outside the physical body via the subtle body. Furthermore, some scholars have claimed that the Bible contains mentions of astral travel.

The final chapter of the Book of Ecclesiastes (written by Solomon) is usually cited in this respect:

“Before the silver cord be loosed, or the golden bowl be broken, or the pitcher be shattered at the fountain, or the wheel be broken at the cistern.”

The Mahabharata Drona (the royal preceptor to the Pandavas and Kauravas and incarnation of Lord Brahma) leaves his physical body to see if his son is alive.

Additionally, astral travel is an ability of the Siddhis considered achievable by yoga practitioners through daily practice and self-disciplined practice.

Moreover, in some Inuit groups, individuals with special capabilities (shamans) are said to travel to remote places and report their things (which are unavailable to people with normal abilities) and experiences that are important to their fellows or the entire community.

People who say they experience astral travel frequently say that their astral body has left their physical body and moved into another dimension, known as the astral plane. 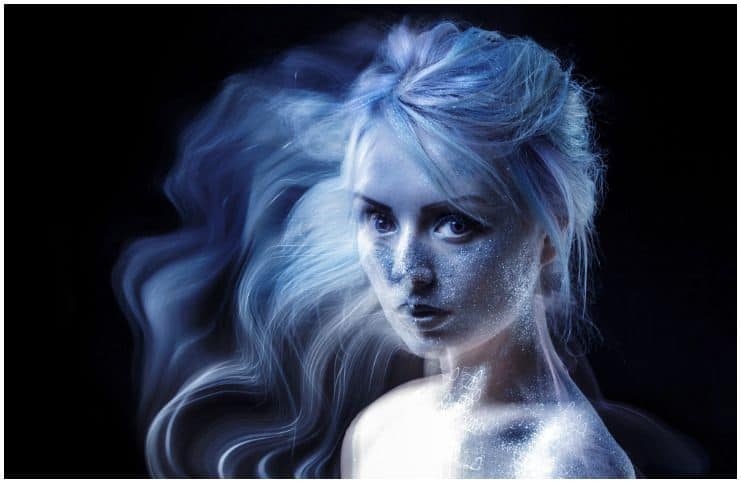 There are many twentieth-century publications on astral projection, although only a few authors remain widely cited.

They include Oliver Fox, Robert Monroe, Sylvan Muldoon (fact – one of Sylvan’s books formed the basis for theories of the Church of Scientology founder Hubbard), Hereward Carrington (British-born American investigator of psychic phenomena), and Yram.

Additionally, French philosopher and novelist Honoré de Balzac in his fictional work “Louis Lambert” hinted he may have had some out-of-body experience.

Also, Emanuel Swedenborg (a Swedish philosopher, scientist, revelator, and mystic) was one of the first practitioners to write extensively about the out-of-body experience, in his Spiritual Diary. 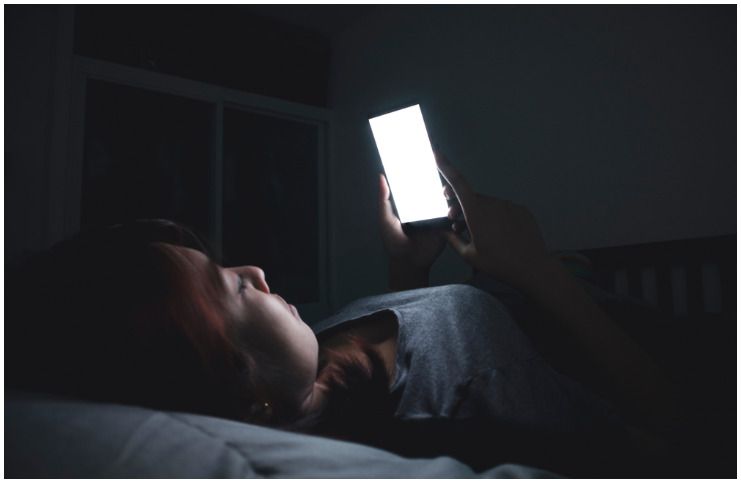 Turn off your mobile phone or any other instrument that might make a noise or beeping sound during your practice. Remove all jewelry, watch, and other items that might be touching your skin.

To astral project, as with all out-of-body experiences, one must feel completely relaxed. Lie on your bed and relax your body and mind. Position yourself on your back in your chosen bed.

Close your eyes and try to clear your mind of distracting thoughts. Concentrate on your physical body and how it feels. Focus on your breathing patterns. Take slow breaths and feel the air entering and leaving your physical body as you slowly inhale and then exhale. The goal is to achieve a state of complete body and mind relaxation.

In the hypnagogic state, which lasts a few minutes at most, you’re practically in limbo between 2 states of consciousness. You experience some elements of sleep mixed with some aspects of wakefulness.

Let your mind and body approach sleep, but don’t completely lose your consciousness. Deepen this state.

#3 Enter a State of Vibration 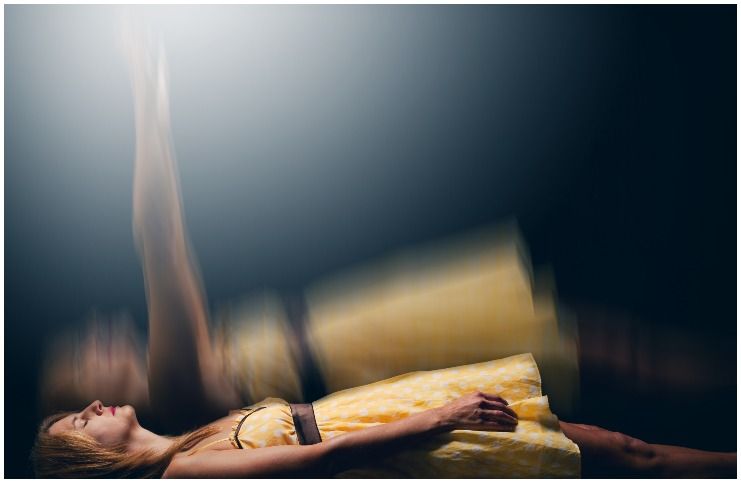 Many practitioners have noted these vibrations at the onset of projection.

They can be experienced as if electricity is being shot through the body, or as a mild tingling. Don’t be afraid of the vibrations, since fear might cause you to leave your relaxed and meditative state.

Instead, surrender to the vibrations as your mind prepares to leave your physical body.

#4 Detach Yourself From The Physical Body 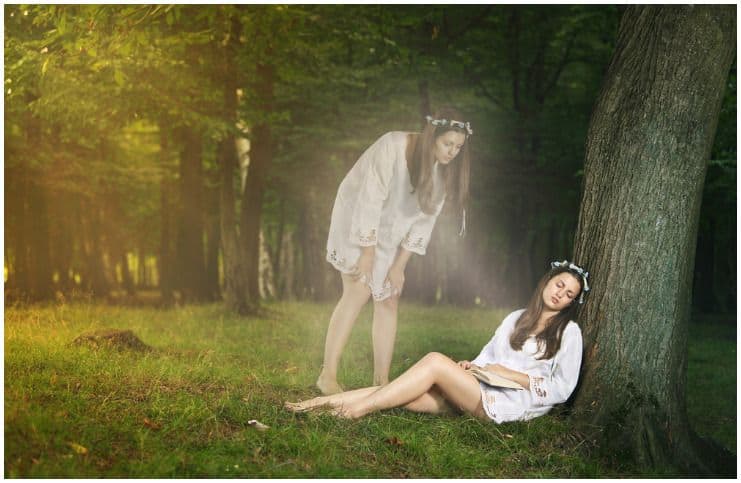 Move your body in your mind to stand up. Look at yourself. Get up off the bed and walk across the room, then turn around and look at your physical body on the bed.

Mastering this technique takes a lot of practice, though for some people it comes as naturally as breathing.

If you find yourself outside your physical body, do not stay out for too long the first time.

Float about your room, become used to the physics of the astral world, and then will yourself back into your physical body.

In addition, ask for protection during the traveling, from your spiritual guides and angels.

The Dangers of Astral Projection 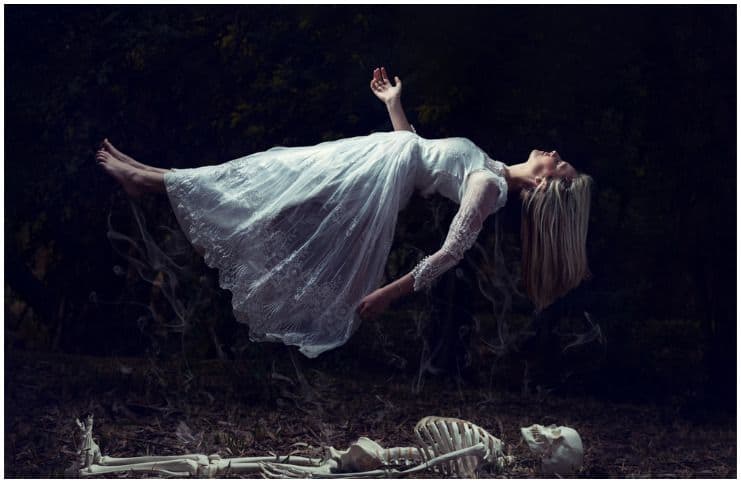 Astral travel is commonly considered to be safe for the majority of practitioners, nevertheless, it is recommended that those with acute psychological issues or disorders should not attempt this practice.

Therefore, the dangers of astral projection include:

You should know that once you are on the astral plane, you will have access to an astral projection guide who can help you avoid any danger.

Some practitioners, after leaving the physical body, have the opportunity to meet with relatives that have already passed away. Thus, they can talk to them and maybe reconcile or clarify anything that needs to be clarified, which was not possible during the lifetime on this planet.

READ THIS NEXT: Best Herbs For Astral Projection

I need help and explanation

What are these astral people capable of doing??? Can they remove objects from my house. puncture things. remove jelly and cream from a closed jar. lock and unlock my front door locks. make flicking or sounds from lights.... What are they capable of doing and how to prevent

this article Is so very wrong.... it's not a silver chord.... it's golden. you are born with this. it works no other way

Ok so if the physical body gets killed could someone else have cut the cord? I was drugged i dont know what it was, i already had psych issues i am a wreck, still...over 2 years later ..im desperate for answers, i question my existence daily. I feel like that night was a set up...they were talking about me as if i wasnt alive...or close to death.. Thry joked and seemed carefree until i started moving and opening my eyes... Then they started to worry. Please, i need answers so i can have closure.

Mandy, I was in a similar situation about 8 years ago. There are no answers in this life. You have to wait. Time speeds up my dear. Focus on replacing old harmful memories with new beautiful ones.

Hmmmm is not easy to if the silver cord is broken then you are dead ,so how can I protect my silver cord