What Is Lotus Flower Meaning in Buddhism?

We might say that lotus is the first flower that opens in stagnant and troubled waters with such sensual and sovereign perfection, insomuch that you can imagine it as the primordial emergence of life on the neutral immensity of the primordial waters.

Also, Buddha Gautama (the Indian spiritual teacher who founded Buddhism) is occasionally depicted sitting on a Lotus flower, representing the one who overcame the pain which prevails in the material world and becomes enlightened.

In Buddhist art, the lotus flower is commonly depicted with eight petals representing the Eightfold Path, a core tenet of the Buddhist practice.

In many different cultures, especially in Eastern religions, the lotus flower is considered to be a symbol of purity, enlightenment, and rebirth.

The characteristics of this flower represent a perfect analogy of the human condition: even when its roots are in the dirtiest water, the lotus gives birth to the most beautiful flowers in the world.

From the Mediterranean to India and China, its symbolic importance has varied manifestations, representing both profane and sacred.

The Colors of the Lotus Have Different Meanings in Buddhism

“As a lotus flower is born in water, grows in water and rises out of the water to stand above it unsoiled, so I, born in the world, raised in the world having overcome the world, live unsoiled by the world.”

In Hinduism, the lotus symbolism is represented by energy centers of the body, also known as the chakras, and is associated with eternity, prosperity, beauty, spirituality.

Furthermore, Lord Vishnu, one of the prime deities of Hindu tradition, was mentioned as “Lotus-Eyed One” in the Vedas.

In Sanskrit, the lotus is known by various names, such as – Padma, Kamala, Pundarika, or Utpala.

In traditional Chinese culture Bing Di Liam, the Lotus flower meaning is “twin lotus flowers on a stem” and is the symbol of a married couple.

The Japanese literature portrays this pure flower in the midst of the dirty waters, as an image of morality that keeps its self-pure and intact in the middle of society and its unkindness, without the need to retreat into a deserted place. 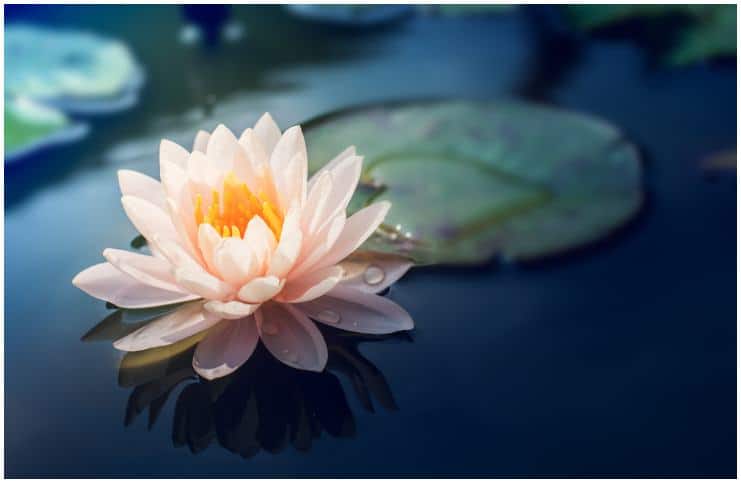 In general, the water lily signifies the spiritual purity of the recipient and the genuine intentions of the person who offers it.

This is when the offering of the flower is a gesture of love. It also shows a deep appreciation of one’s spiritual qualities.

Additionally, purple, red, and blue Lotus flower can take on a spiritual meaning of enlightenment, ascension, or rebirth.

“The lotus is the most beautiful flower, whose petals open one by one. But, it will only grow in the mud. In order to grow and gain wisdom, first, you must have the mud – the obstacles of life and its suffering…”

READ THIS NEXT: The deepest question: Who Am I?

The energy vibrations around our bodies are shaped like a lotus, although we can't see it.