”Hail the jewel in the lotus.”

This is the six-syllable Sanskrit mantra, related to the Bodhisattva of compassion, Avalokitesvara (also known as Chenrezig in Tibetan), a manifestation of the Gautama Buddha in the Sambhogakaya, and His magical mantra is considered the essence of the Buddha’s compassion for all beings.

Just as Padmasambhava is the most important spiritual master for the Tibetan people, Bodhisattva Avalokiteshvara is their most important Buddha and the karmic deity of Tibet.

What is the Meaning of Om Mani Padme Hum Mantra:

„This is the most beneficial mantra, even I made this aspiration to all the million Buddhas and subsequently received this teaching from the Buddha Amitabha.”

During an interview, His Holiness the 14th Dalai Lama said about Om Mani Padme Hum mantra:

„That is the natural ubiquitous pervasive force of consciousness. These healing frequencies are in the Sanskrit tongue, act as a harmonic sound resonance against blocking energy, or sleeping energy. Plants reflect this action as well because of the phonetic strength of vibration that is stimulated by natural pronunciation.”

In the traditional spiritual teachings, it is said the benefits of chanting this mantra daily are so many that the explanation will never finish.

Chanting the mantra with a correct pronunciation and pure intentions purifies us on three levels: speech, mind, and body, and in this way completely liberates us from all our negative karmas.

„If one lives one’s life with that pure attitude free of attachment clinging to this life and then just spends one’s life chanting this mantra, that is the essence of all  Dharma – that’s the purest Dharma. It looks very simple, very easy to recite. But it’s not simple when one thinks of the benefits.” – Kyabje Zopa Rinpoche`s quote. 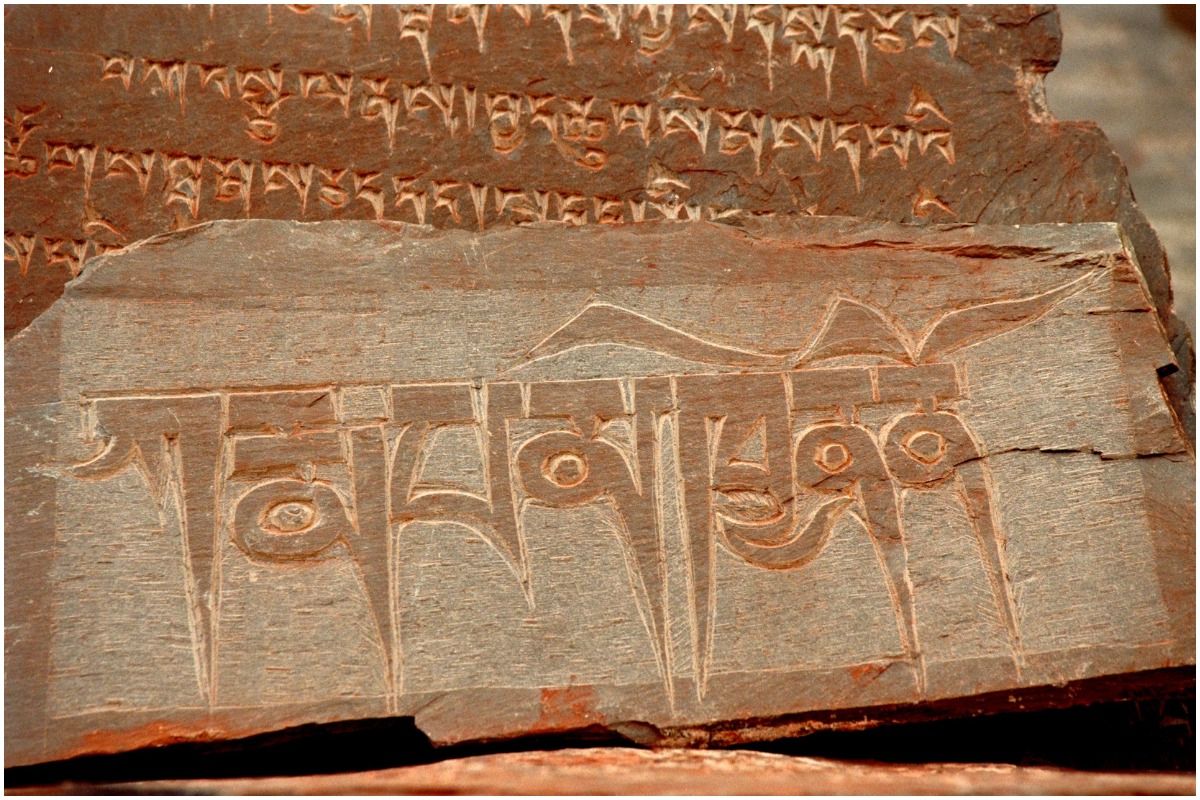 According to the records in the Jewel-Chest sutra, reciting hundred-million times of this Buddhist mantra will cause all the organisms on one’s body to receive Chenrezig’s blessings, and after one’s death, the smoke from the cremation of one’s corpse can protect anyone who breathes it from rebirth in the 3 lower realms.

Even one syllable from this powerful mantra, whether it be ”Om,” ”Ma,” or ”Ni,” has inconceivable power. It can bless and cause sentient beings to be liberated. It is said that the Buddha, who has such extraordinary power far exceeding those of any living being, can tell accurately how many raindrops there are in a rainstorm lasting twelve years, but yet, even he is unable to completely express the merit of saying the Mani mantra once.

If the Buddha began to express its merit, even if all the world’s forests and trees were made into paper, it would not be sufficient for writing down even the smallest part of the merit of the mantra.

Mantra meaning, according to the 14th Dalai Lama, during a lecture held in New Jersey:

„It is very good to recite the mantra, but while you are doing it, you should be thinking on its meaning, for the meaning of the six syllables is great and vast. The first syllable, OM, is composed of three pure letters, A, U, and M. These letters symbolize the practitioner’s impure speech, body, and mind; they also symbolize the pure exalted body, speech, and mind of a Buddha […]

The syllable MANI, meaning jewel, symbolizes the factor of method, the altruistic intention to become enlightened, compassion, and love […]

The two syllables, PADME, meaning lotus, symbolize wisdom. Just as a lotus grows forth from mud but is not sullied by the faults of mud, so wisdom is capable of putting you in a situation of non-contradiction whereas there would be a contradiction if you did not have wisdom […]

„There is not a single aspect of the eighty-four thousand sections of the Gautama Buddha’s teachings which are not contained in Bodhisattva Avalokiteshvara’s six syllable mantra, and as such the qualities of the “mani” are praised again and again in the Sutras and Tantras. he continued – whether happy or sad, if we take the “mani” as our refuge, Bodhisattva Avalokiteshvara will never forsake us, spontaneous devotion will arise in our minds and the Great Vehicle will effortlessly be realized.”

READ THIS NEXT: Green Tara Mantra Meaning and Benefits

OM is the sound of the in breath and out breath at once. So/in-hum/out, so/in-hum/out. We are our breath, we are OM. Mani is the focus of mental awareness into our heart, our heart being the rhythm of OM and the gateway to pure peace. Padme is an open heart to all suffering/loss and recognizing it for what it is - that the heart is there. Hum is full circle, yin yang, of the breath, in and out are the same thing. Hrih is the alignment of yin yang, sun moon, positive negative within the focus of mental awareness into our heart as our breath. When aligned, our conscious awareness is taken through our heart to experience the big blue peace, the greater integrity, that which is everything and nothing at once. We become yoked to the divine. To experience this mantra is to become it.

Om Mani Padme Hum is the mantra that we love to listen every morning. The sound of the mantra is very appreciated by our villagers as they can listen it while they walking by.

We listen it and recite internally while creating mandalas and thangka paintings. It helps us keeping the focus on the canvas and the movement of the brush. We believe it brings a happy mood also in the curious about the art we make and it brings a sense of gratitude, compassion and happiness.