Solar eclipses are rare events that happen when the Moon is positioned between Earth and the Sun, thus blocking the sunlight and reflecting, at the Earth’s level, only its shadow.

At the beginning of an eclipse, the shadow can hardly be seen. When the Moon fully covers the Sun, the eclipse reaches the stage called “totality,” and the consequence is the complete darkness that redounds on Earth.

It may last up to seven and a half minutes, after which the Moon begins to move in the reverse direction.

The only visible part of the Sun, throughout the “dark stage,” is what is called the “Sun’s corona,” representing its outer atmosphere, the result of a gas mix, that is very rarely visible.

The solar eclipse can last a maximum of seven and a half minutes, but it is often shorter (about half the maximum duration).

Total eclipses generally occur once every two years, and can only be seen in certain areas of the globe, while partial eclipses occur two to three times a year.

In addition to total solar eclipses, there are annular eclipses, that occur when the Sun, Moon, and Earth are perfectly aligned, but the Moon’s orbit is so far away from Earth, that it is too small to block the entire surface of the Sun, which appears as a brilliant ring around the lunar disk.

In partial eclipses, only a small portion of the Sun is obstructed by the Moon.

Interestingly, total eclipses can only happen by a strange coincidence: the dimensions of the Sun and the Moon become perfectly identical.

A less known fact is that total eclipses cannot be seen from the South Pole or the North Pole, with only partial eclipses visible in these locations. 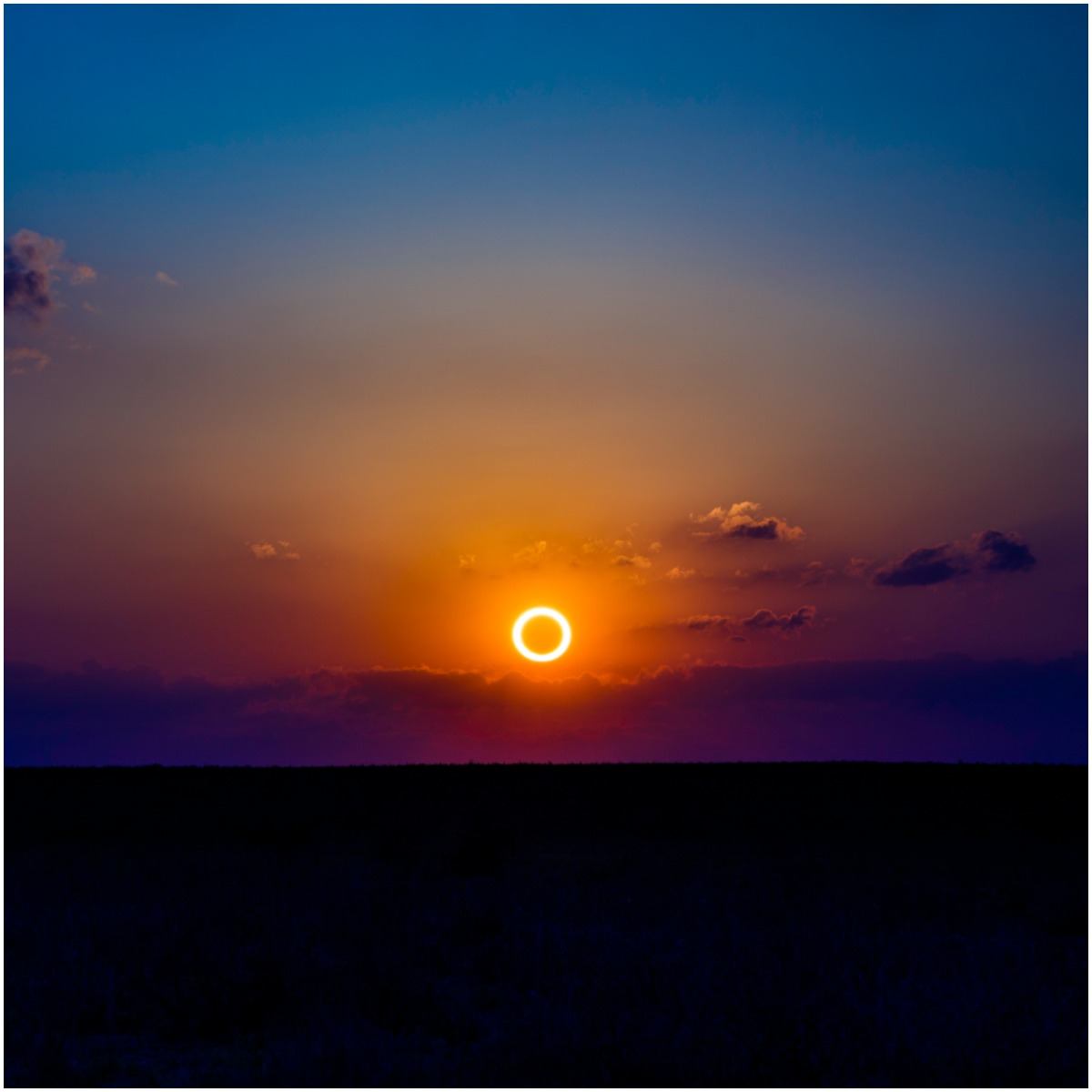 When the total eclipse is about to occur, temperatures may drop by more than 20 degrees Celsius.

A total eclipse becomes noticeable only when the Sun is covered by the Moon in a proportion of 90%.

When the Moon covers the Sun in 99%, the sky is like the twilight. Total solar eclipses can induce changes in the behavior of birds and animals, that start to behave strangely.

Eclipses, total or partial, have been observed with interest throughout history.

There is a lot of evidence that people in China and Babylon have been paying attention to such phenomena 4000 years ago.

They believed it represented a favorable or a threatening manifestation of the divine will.

In ancient China, depending on solar and lunar eclipses, the destiny of the emperor was anticipated, and four millennia ago, two Chinese astrologers were executed precisely because they failed to provide the exact date of the next eclipse.

The first solar eclipse accurately predicted, based on scientific calculations, was that on July 16, 1330, made by Nicephore Gregoras (historian, philosopher, and Byzantine scholar) using Almagest, Ptolemy’s fundamental work of mathematics and astronomy, from the second century. 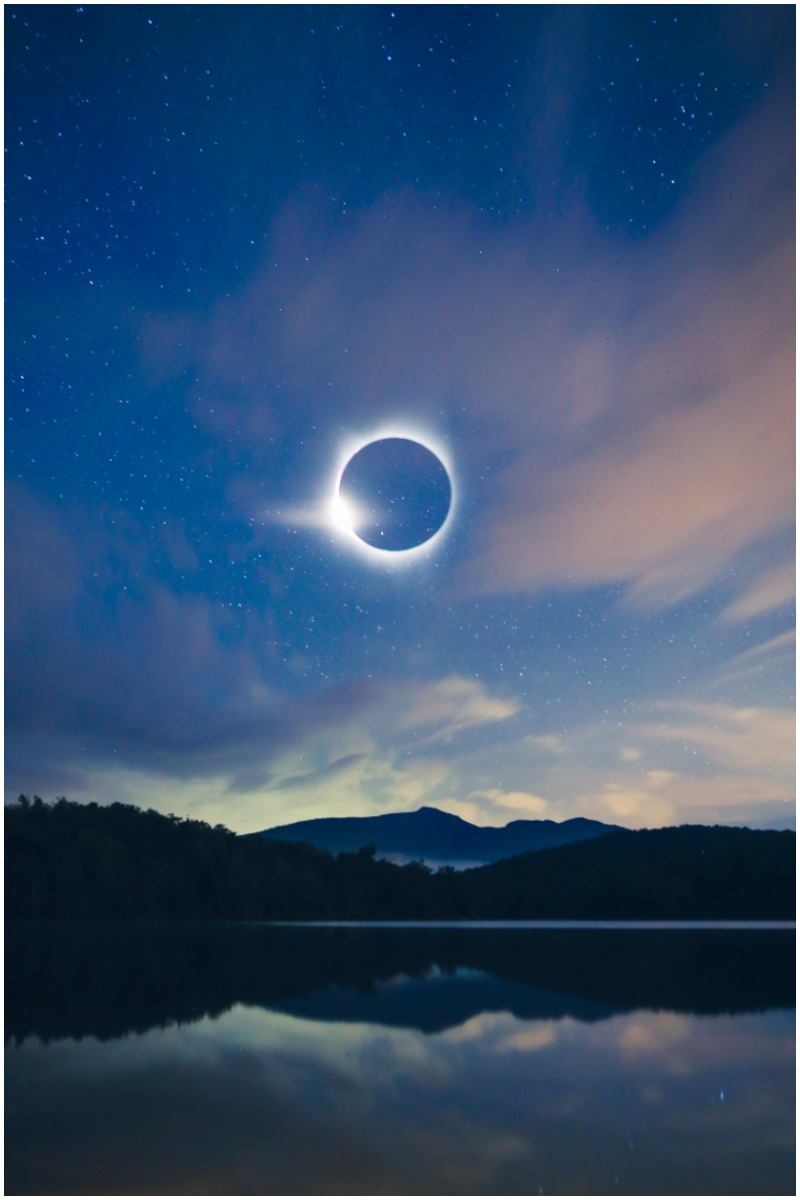 Throughout history, there have been (and still are) many superstitions about solar eclipses, reactions, and beliefs that have been passed along generations, ignoring the relatively innocuous nature of these astronomical phenomena:

Pregnant women should not leave the house during the eclipse so that the infant remains protected from the influences of forces that humans don’t know and cannot control.

Another superstition refers to gastronomy – any kind of food cooked before an eclipse must be discarded after it ends because it becomes impure.

Those who, during the eclipse, hold a knife or any other sharp object in their hand will cut themselves into it sooner or later.

Ancient peoples associated the eclipse with the moment when the monsters devoured the Sun/Moon, therefore, strong noise had to be made.

According to the legends of the Kwakiutl tribe (North American Indians who lived in what is now Canada and British Columbia), the mouth of heaven consumes the moon or sun during an eclipse.

READ MORE: Spiritual Meaning of Butterfly Landing On You

All eclipses symbolize change: they predict new beginnings and usually manifest themselves as events in the outside world.

Around the time of solar eclipses, we start something new, we become hopeful, we make commitments and affirmations, plans and choices, we accept challenges, we make decisions, we change, we grow up, we make efforts, we feel unsettled or pressed for time, emotions overwhelm us, we experience a crisis and we are excited.

Eclipses can occur at the Northern Lunar Node or the Southern Lunar Node. In the first case, it is a particular orientation that symbolizes personal identity, the ego, and the physical body.

The latter is oriented towards others and symbolizes a partner or someone else important, relationships, and new prospects that rely on interaction with others.

READ MORE: What Is The Spiritual Meaning of Dream Catchers?

When you dream about a solar eclipse, it means that someone is hiding the truth from you, or that you are lying to yourself, you experience certain delusions, and the appearances are very deceptive.

The lunar eclipse represents pretty much the same thing, but it also involves mystery, unknown professional aspects, the risk of being cheated on by your partner, the ever-changing character of love, and the daily quirks.

In general, eclipses symbolize the friendship aspect of a love relationship, since love begins to fade away and, for this reason, partners become resentful and feel that their relationship is going cold. On the other hand, for people who are in love, dreaming about an eclipse may be a sign of good luck in that area.

A solar eclipse can also symbolize a great loss, family misfortune, a hard day, or war. If you dream about looking at it intensely, you will experience failure, death, sickness, or bad luck.

READ THIS NEXT: Spiritual Meaning of Snake Bite in a Dream