Since ancient times, tales of spirits who return from the dead to haunt the places they left behind have figured strikingly in the folklore of numerous cultures worldwide.

For instance, the ancient Romans believed a ghost could be used to exact revenge on an enemy by scratching a curse on a piece of pottery or lead and placing it into a grave.

In 1915, Sir Gaston Maspero, a French Egyptologist, published a translation of an ancient Egyptian ghost story, most likely set in Luxor (the pharaohs’ capital at the height of their power), which was discovered on four pieces of pottery. In this Egyptian story, a ghost of a mummified man tells a high priest of the god Amun about his current condition.

“I grew, and I did not see the rays of the sun. I did not breathe the air, but darkness was before me every day, and no one came to find me,” the ghost says.

Spirits can manifest in many different ways, including streaks of light, orbs, dark shadows, strange blurs, and mists. Also, full-body apparitions are possible but highly unlikely.

Perhaps one of the most popular terms most of us have heard when it comes to ghosts is ”poltergeist.” The word means “noisy ghost” since it is said to have the capacity to make noise, knock or move things over, and manipulate the physical environment.

In 856 AD, the first poltergeist was reported at a farmhouse in Germany. The poltergeist tormented the family living there by starting fires and throwing stones, among other things.

Here Is A List Of 9 Signs Of A Bad Spirit In Your House: 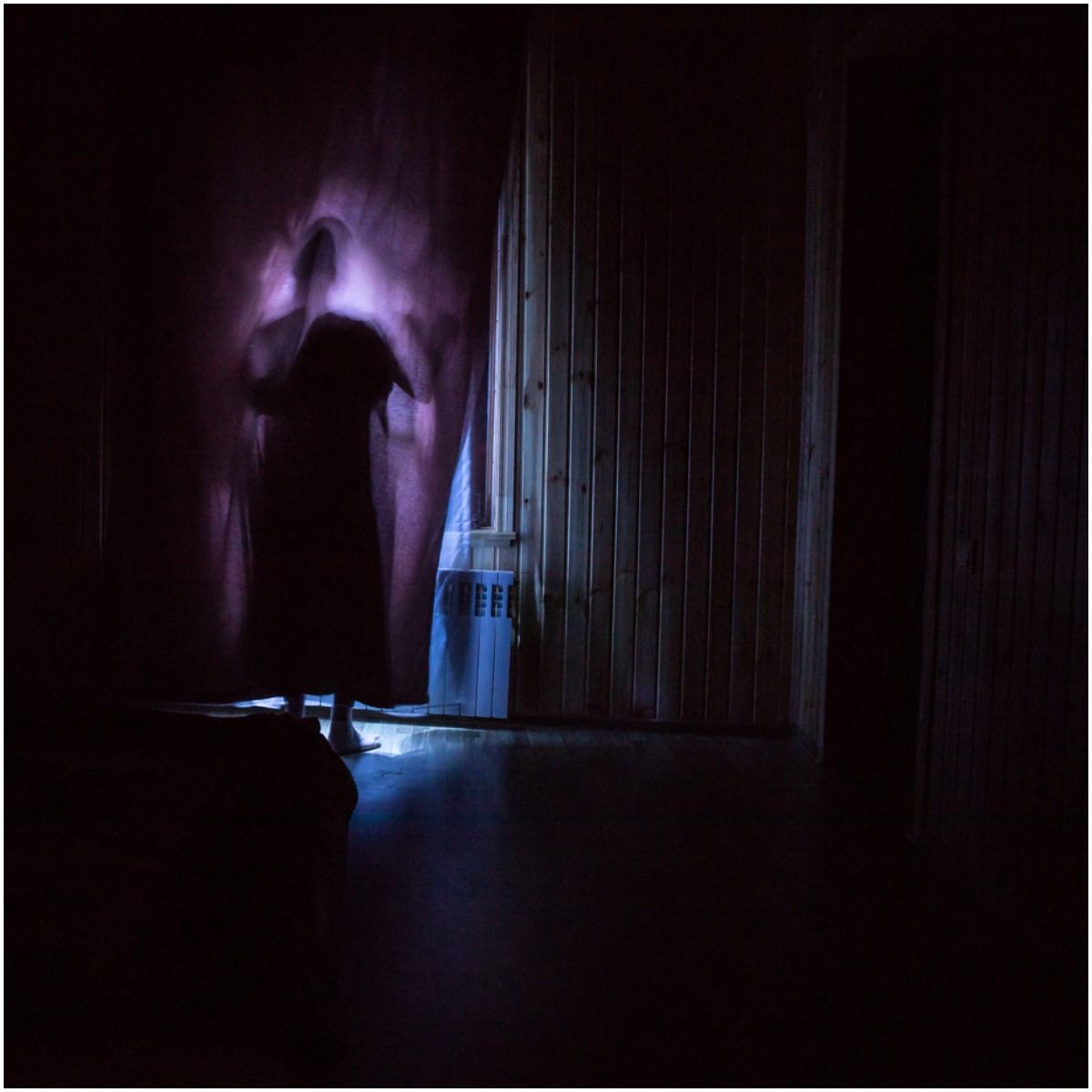 READ MORE: Ways to Protect Yourself from Energy Vampires

#2 Feelings Of Being Touched

Some feel a gentle poke, push, or nudge. Others can feel something brush past them, touch their hair, or a “hand” on their shoulder.

This can be clear or muffled voices, crying, whispering, growling, or laughing. People may hear their names being said. Occasionally, it’s music from some unknown source.

Note – this phenomenon is true for most, but these occurrences gain more credibility if more than one individual sees or hears the same thing simultaneously.

Randomly finding an object from a loved one or a family member – one who has crossed over. 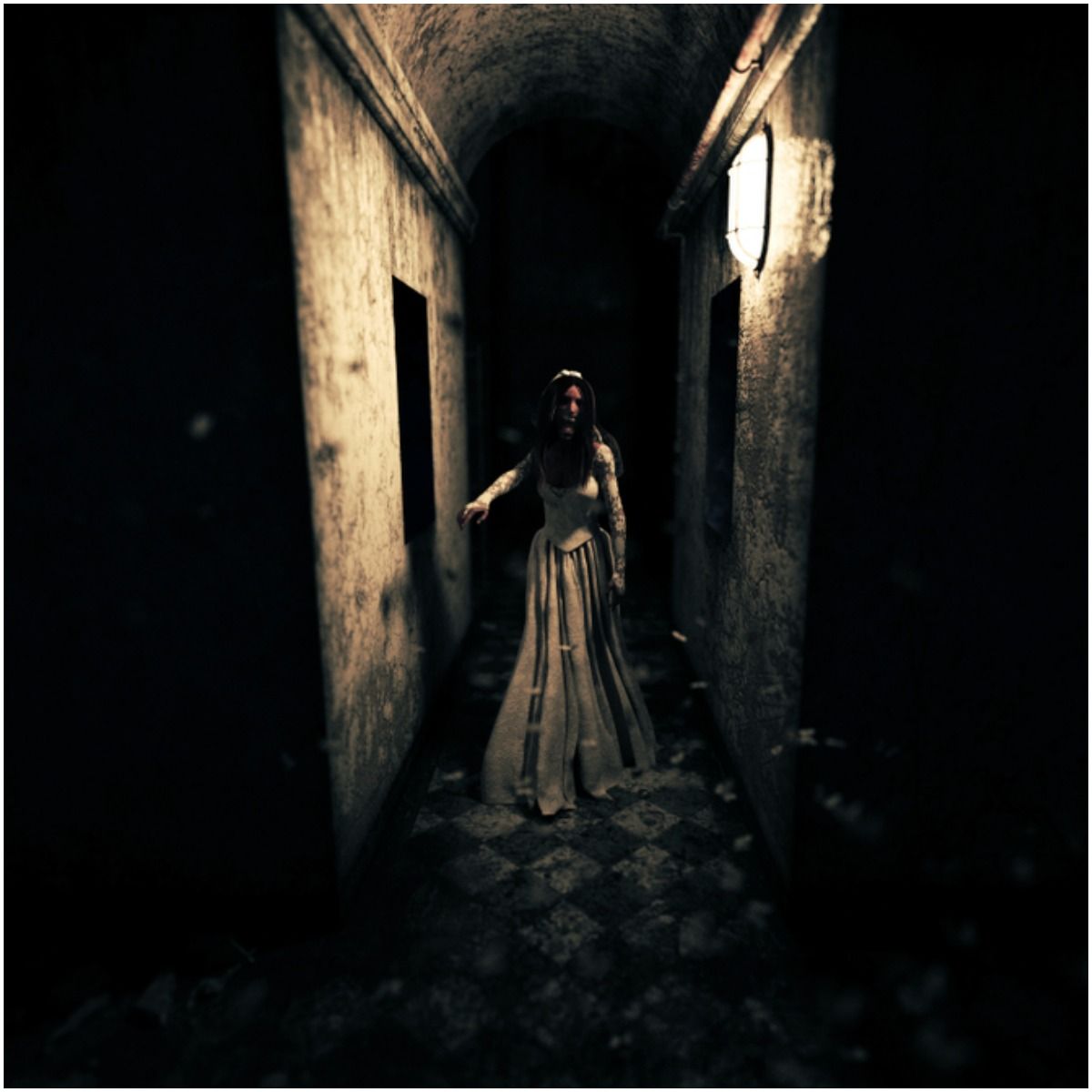 Psychokinesis is an alleged psychic capacity allowing a person (or a ghost) to influence a physical system without physical interaction. The term psychokinesis is derived from the Greek words ”psyche,” meaning “life,” “breath,” or “soul,” and ”kinein,” meaning “to move.” The idea of people (or ghosts) being able to move objects through mind power alone has intrigued people for hundreds of years.

For example, in the 1970s, Uri Geller (an Israeli magician, illusionist, television personality, and psychic) became the world’s best-known psychic by demonstrating his claimed psychokinetic capacities, including bending spoons and starting broken watches.

If your house is haunted, a sign may be that a ghost or poltergeist makes its presence known when doors are swinging wide, cupboards flying open, or glasses flying off tables.

Other extreme instances have been recorded, such as shaking and levitating beds while people are in them, moving furniture, as well as turning on faucets in sinks and showers.

Many individuals report cold spots in haunted houses. These are small areas which feel substantially colder than the surrounding area. Some cold spots are always felt in the same place, while others seem to disappear and appear at different locations. Some believe these cold spots to be a sign of a ghost in the house. 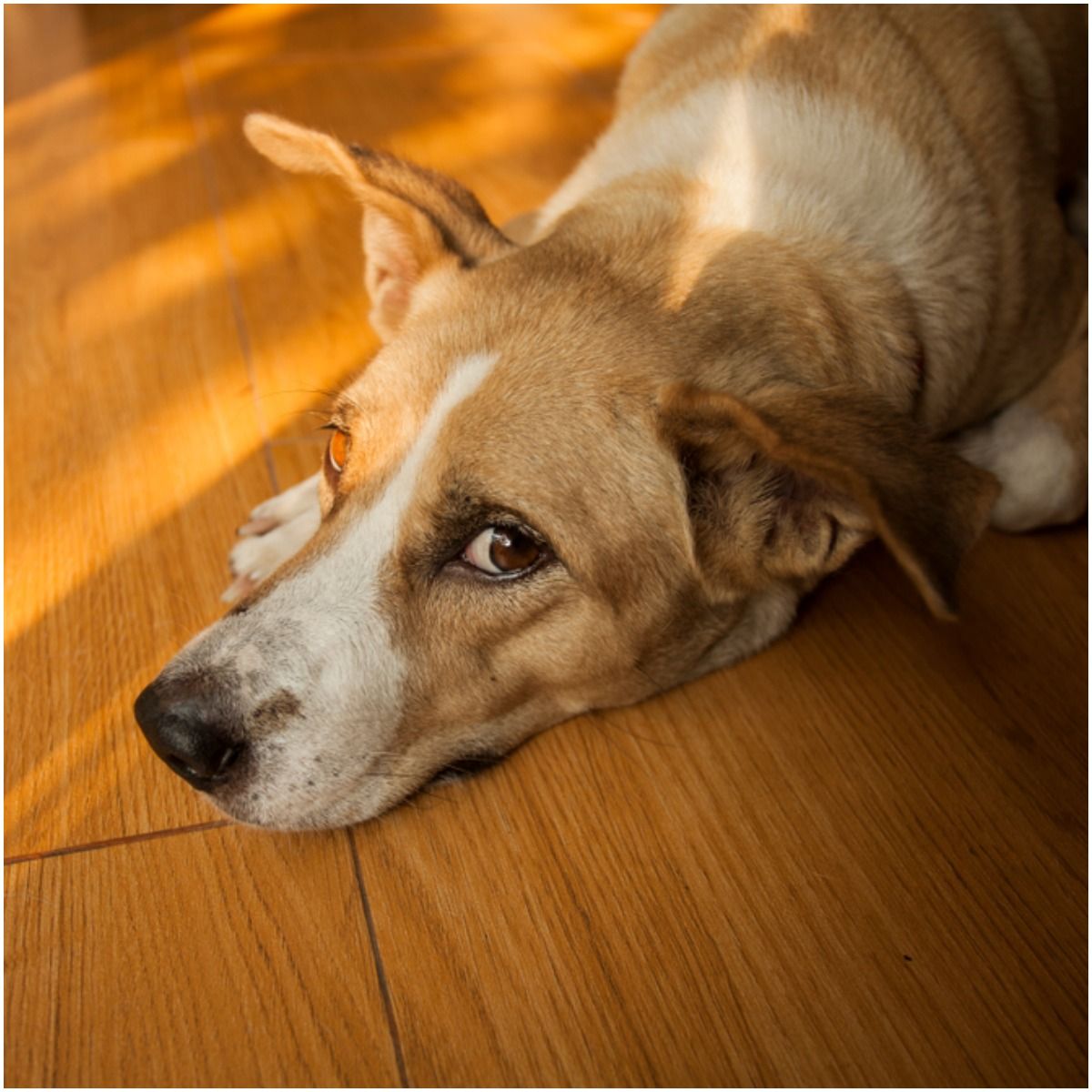 Pets’ scared behavior is the best sign, particularly in dogs. They cuddle whenever you’re feeling lonely, they are your companion when you need a friend, and they can make you smile the second you walk in the door.

Moreover, a dog’s eyes detect more delicate movements. He can hear much higher frequencies and at 4 times the distance of a human with normal hearing. In addition, his sense of smell is 1,000 to 10,000 times more sensitive than a human’s.

Many pet owners reported that their dogs alert them to a supernatural presence by backing away from something that cannot be seen or by growling, barking, or staring at nothing. Furthermore, some people said their dog displays flared neck fur when a ghost is close by.

Lights will turn on & off when the experiencer knows they previously left it on or off. Also, this can happen to electrically powered devices such as radio and TVs. The problem is that this phenomenon is rarely witnessed. 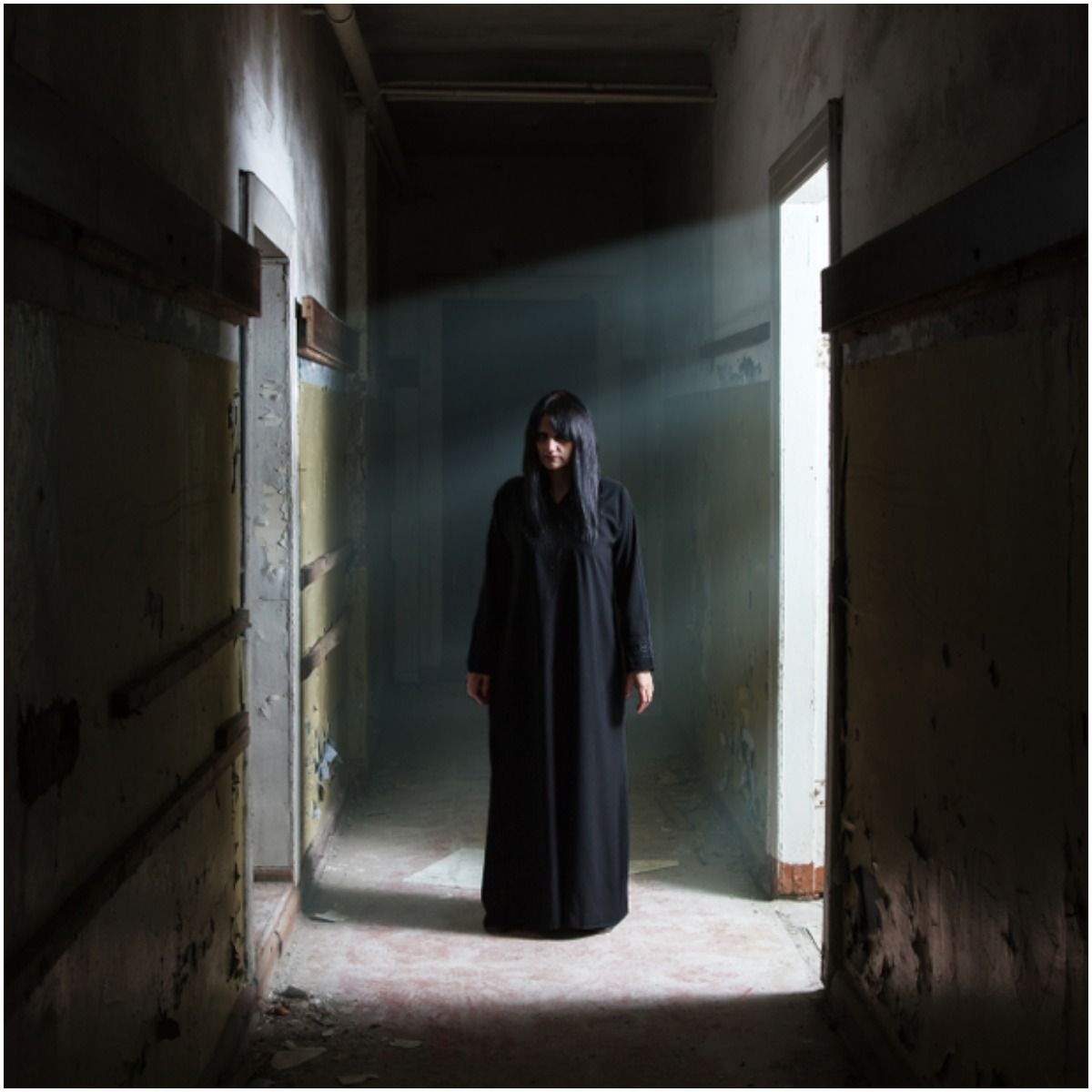 Houses, whether new or old, make plenty of noise. The many materials that make up your house — plumbing pipes, wood framing, glass, plywood, nails, metal ducts – all expand and contract at different rates. You might not notice it during the hustle and bustle of the typical day; however, when things calm down at night, all those noises come out.

In rare occasions, this can be a sign of ghosts since they become more active at night, most likely due to a reduced electronic disturbance from appliances that compete with or drown out ghostly apparitions.

How to Get Rid of Unwanted Ghosts

These are several ways to get rid of unwanted ghosts:

Praying is a great way to cleanse the home before communicating with the unwanted spirit. Calling upon angels, God, spiritual teachers, or saints to assist this spirit in light can help in this problem.

A good way to freshen up your space is to simply play around with your furniture’s arrangement. This could involve redoing a whole room, or it could be as simple as switching the layout of 2 armchairs.

Some letters and words of a particular origin have strong, uplifting life-altering vibrations. If recited systematically in your house, these sacred words will create strong vibrations, eliminating the existing negative vibe.

Keeping broken items in your home sets the tone for what you will accept and tolerate in your own life.

Simply sprinkle salt on the carpet. After about 60 minutes, vacuum. This is so effective since salt crystals have the natural built-in ability to absorb negative energy.

READ MORE: Ways To Remove Negative Energy From Your House

#6 Protect Your Space With Crystals

All crystals have different properties, but the best ones for creating a feeling of peace are selenite, kyanite, hematite, obsidian, and desert rose.

It is an ancient ceremony in which sacred plants are burned, and the resulting smoke is wafted throughout your home to bless it.

The practice of smudging comes from the Native American tradition. In addition, this practice is used to cleanse a person of negative energies.

READ THIS NEXT: 10 Signs You Need To Clear Negative Energy From Yourself

I urge her to not Communicate! I made that mistake and now have an infestation , idk if i opened a portal or it may have always been here, we have always suspected something, i use to love ghost hunting and recently went on a very long overnight investigation , i may have had somethng follow me home, i made a video in my bedroom one day and captured some nasty voice, i began recording and trying to find out what i was dealing with and opened a can of worms , i just had a couple who investigste and help cleanse homes come in , ive never seen so much activity ! They were also blown away as the equiptment was going off before they were even ready to start , but as much as i love ghost hunting , this is the danger in it , tell your sis to pray and try not Communicating , she can try using prayer as well as religous relics ,,along with some sages , poulo santo , merr , frankencence( sorry not spelling them correct lol)...holy water and if possible have above items blessed before use , she can look online on how to cleanse the home there are certain steps to take , she may start to feel affected physically emotionally if it is bothering her as she sleeps she should keep a light on they dont like light , take care , God bless 💖

HEY , BACK IN THE DAYS WHEN I WAS IN 12 GRADE MY MARKS ARE SO GOOD AND ALL THE TIME I THINK ABOUT MY GOAL AND WORK ON IT BUT I NOTICED ONE THING THAT FROM THE TIME WHEN ONE OF YOUR NEIGHBOUR COME TO KNOW THIS THAT I SCORED WELL THEN THEIR DAUGHTER THEY STOPPED TALKING TO US AND I DON'T KNOW WHY THEY ALWAYS LOOK AT US SO SUSPESIOUSLY.I STARED LOOSING INTEREST IN MY STUDIES AND NOT GET MY WORK DONE AS PER MY CHOICE . ALWAYS SOMETHING HAPPEN WHEN EVER I START NEW PROJECT . FIRSTLY , I ALWAYS USED TO DISSCUS MY PALNS WITH MY FRIENDS . BUT I NOTICED SOMETHING THAT THINGS WHICH I DON'T DISCLOSE WORK PROPELY . BUT AS I WANTED TO START A BUSSINESS I SURLY NEED TO DISCLOSE IT OR NEED TO DISSCUS IT WITH SOMEONE (MY HELPERS) BUT AS SOON I DISCLOSE SOMETHING HAPPEN EVERYTIME WHICH IS NOT EVEN CONSIDERABLE. I REALLY WNT A SOLUTION ,IS IT SOMETHING BECAUSE OF A SPRITI OR WHAT.

@DREAM, Sit silently.. In the morning.. 4 am.. 5am..whenever u dont hv noice arround u. Fix ur alarm for 15 min in ur ph. N make ph on flight mode... Band ur eyes with.. Soft cloth.. Open Only when your alarm raise.. Consuntrate on ur breath how come n go.. Sit silently in a meditation pose.. Start today n repeat daily.. Few days u feel dark.. Feeling like weeping.. But this is Only happen 1st week after that ur spirit feeling strength n u feel peace.. N recvd every answer.. U r all blockage is gone n work going b smooth.

Take seven red dried chilli.. Round up on ur head clock wise 7 time put down on gas flame.. This remove all bed eyes on u...

There is something in my house. This all started since we moved in, but a couple of years ago it really picked up. I started hearing a voice at night before I would fall asleep. It would say my name and shake my bed. My family members have had similar experiences. We've all talked about it and it is mimicking our voices. It has knocked over things and hid objects from me then the object appears seconds later. I few of us have been touched and when we turned to look there was nothing there. I could go on and on. It started to scare us to the point that we don't use our upstairs rooms anymore. We have blocked it off but we are still hearing noises from up there. We don't know what to do anymore. My family doesn't think it has any bad intentions but from what I've looked up everything it doesn't look good.

@Lauren, go to rhe Church on every Sunday.. Attend prayers. N prey for protection n Sale ur house as soon as possible. Bcz ur life is more valuable rather then ur house. This is the last option..

But if u wanna b stay there. Burn a white candle.. Sit relax. N talk to that person by words.. Who r u.. Belongs to us or not?? No matter. What's u want.. If you want we leve this place.. We must leve if u want some things.. To leve this place we will try to make them.. We r staying here from a long while.. But don't harm u.. Even we gv u a place that we don't want to be disturbing u.. SO.. Stay in Peace n live in Peace..

Try this may b ur problem solved.. God bless you.

i am going through the same thing but i fear for my dog he is all i have and cherish and he has been scared and injured i think by this whatever it is. I provoked it and since the it has got worse but is is comforting to know i am not crazy so thank you