Alchemy, derived from the Arabian phrase, “al-kimia”, is an ancient type of chemistry that tapped into the qualities of substances.

The symbols relating to alchemy have been around for centuries and seem to contain a mystical element to them that piques people’s interest.

If you’ve ever seen these symbols before, you might be pondering their meaning.

In this article, we’re going to talk about 21 alchemy meanings, their pictorial references, and much more.

Depending on who you speak to, alchemy is considered either a branch of science or philosophy.

It was practiced in Europe, Asia, and Africa but actually originated in early AD times in Greece, Rome, and Egypt.

Alchemists in these times had a few goals including:

If someone achieved these goals, wealth and fame came to the alchemist.

The majority of them cheated to claim they did it. Thus began the slow decline of the integrity of mainstream alchemy.

How Many Alchemy Symbols Exist?

Generally speaking, each symbol contains a clue to the history of the corresponding substance.

Originally, alchemy took a lot of information from astrology, so several symbols are connected to celestial entities.

These days, people love them for their history and quirky designs.

So, let’s take a look at some, shall we?

Potash is a naturally occurring salt that is used for a variety of purposes, including the production of glass, soap, as well as helping the dough to rise while baking.

Today, potash is still used in a variety of industries, including as a fertilizer and as a cleaning agent. It is also used in the production of glass and ceramics.

Gold is the most precious of all metals.

In numerous cultures, the Sun is associated with or symbolizes gold.

As a transitional metal, gold is symbolic of flexibility on our spiritual path.

Silver is one of the most well-known and precious metals, and it has been used for various purposes since ancient times. Some symbolic meanings of silver include:

Silver is the metal of sensitivity and emotions, and it will mirror your soul’s search for sacred space.

Zinc is known as a metal chemical element.

Dreams, where zinc is featured, symbolize the authority of the self. Zinc can be used to boost fertility, grief, and property rituals.

Iron has been universally perceived as the symbol of human strength, fortitude, obstinacy, courage, honor, and sharpness.

For a long time, salt was money for exchange. Actually, the word “salary” comes from the Latin “salarium” as the Roman soldiers were paid in salt.

Salt is essential for life. It represents taste, enables food to be conserved, and mummifies bodies.

Magnesium is responsible for over 300 enzymatic reactions in the human body. It’s found in your brain, bones, tissues, and muscles. 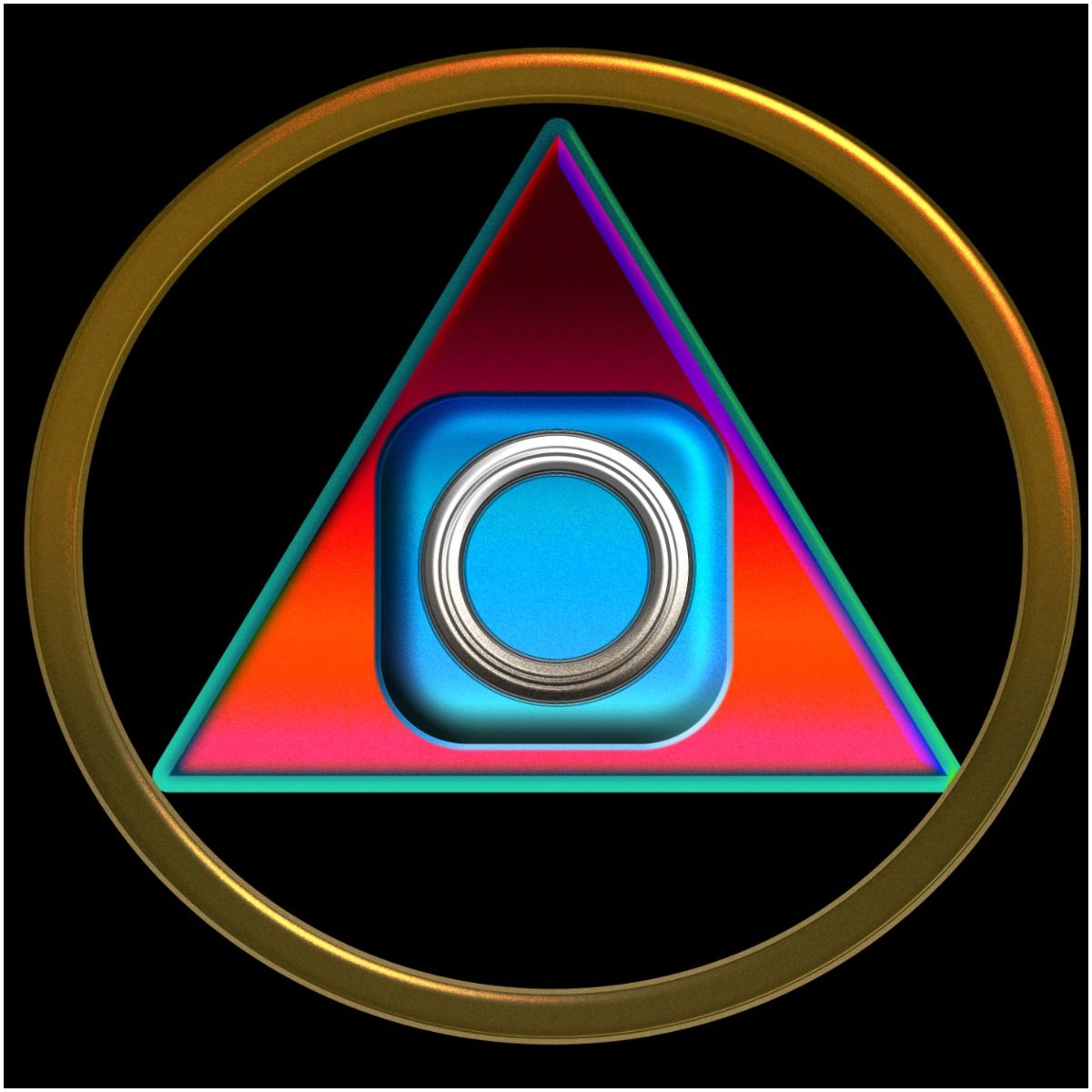 The philosopher’s stone is a legendary substance, which was sometimes believed to be an elixir of life.

The philosopher’s stone is thought to be used for rejuvenation and possibly for achieving immortality.

Moreover, it was believed that this stone had the power to cure any type of disease, hence, offering the gift of immortality to the person who carried it.

The philosopher’s stone is also capable of turning base metals such as mercury into gold or silver.

Symbolically, water is frequently viewed as the source of life itself as we see evidence in countless creation myths in which life emerges from primordial waters.

In Christianity, water can be ritually blessed and serve as a spiritual symbol of God’s protection over a person touched by this Holy Water.

Bismuth is a crystalline, brittle metal that is silvery-white with an iridescent hue.

Its symbol appears in texts, usually as a circle topped by a semicircle or as a figure 8 open at the top.

Bismuth stimulates vitality and energy and can help you to achieve your goals, particularly when working as part of a team.

As a healing crystal, bismuth lessens catatonic states and has been used to diminish fevers.

Antimony symbolizes the call of the wild. Also, the symbol is worn when someone wants to embrace their animal power.

The alchemy symbol for air is an upright triangle with a horizontal bar. Air is the element of youth, increase, new beginnings, and creativity. 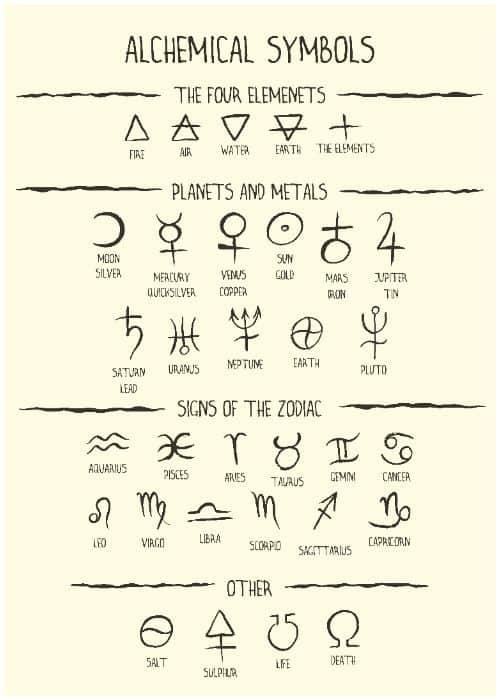 Phosphorus was an ancient name for planet Venus when seen before sunrise.

Phosphorus was of interest due to its apparent ability to contain light, as evidenced by its glow-in-the-dark phosphorescence of phosphorus compounds. 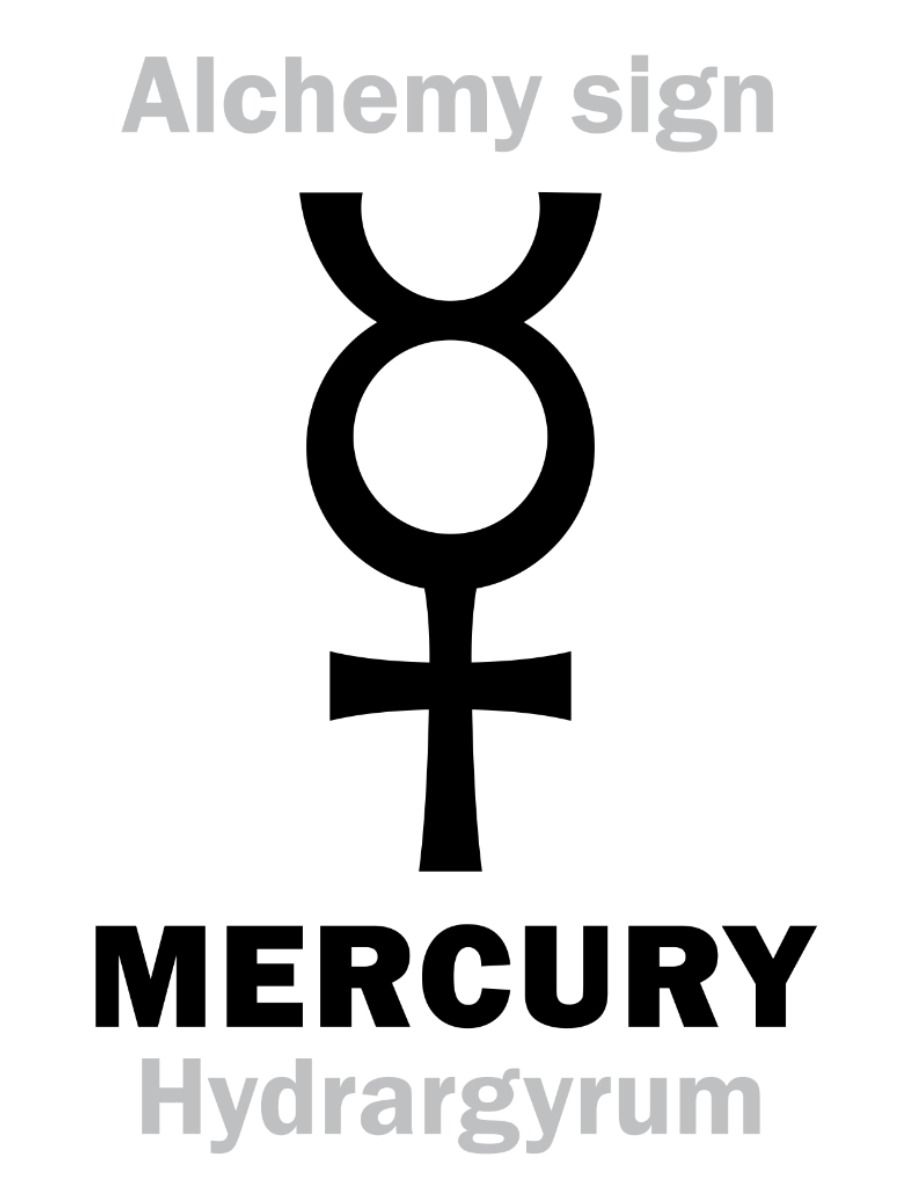 Mercury (Latin name hydrargyrum), also referred to as “quicksilver,” (a reference to its mobility), was one of the central elements in western alchemy.

Tin is a chemical element with the symbol Sn and has atomic number 50. Tin is representative of Jupiter.

This element is associated with balance, mediation, and a philosophical view of life. Additionally, this element embodies logic, education, wisdom, knowledge, and maturity. It is thought that tin is the metal of the scholars and sages. 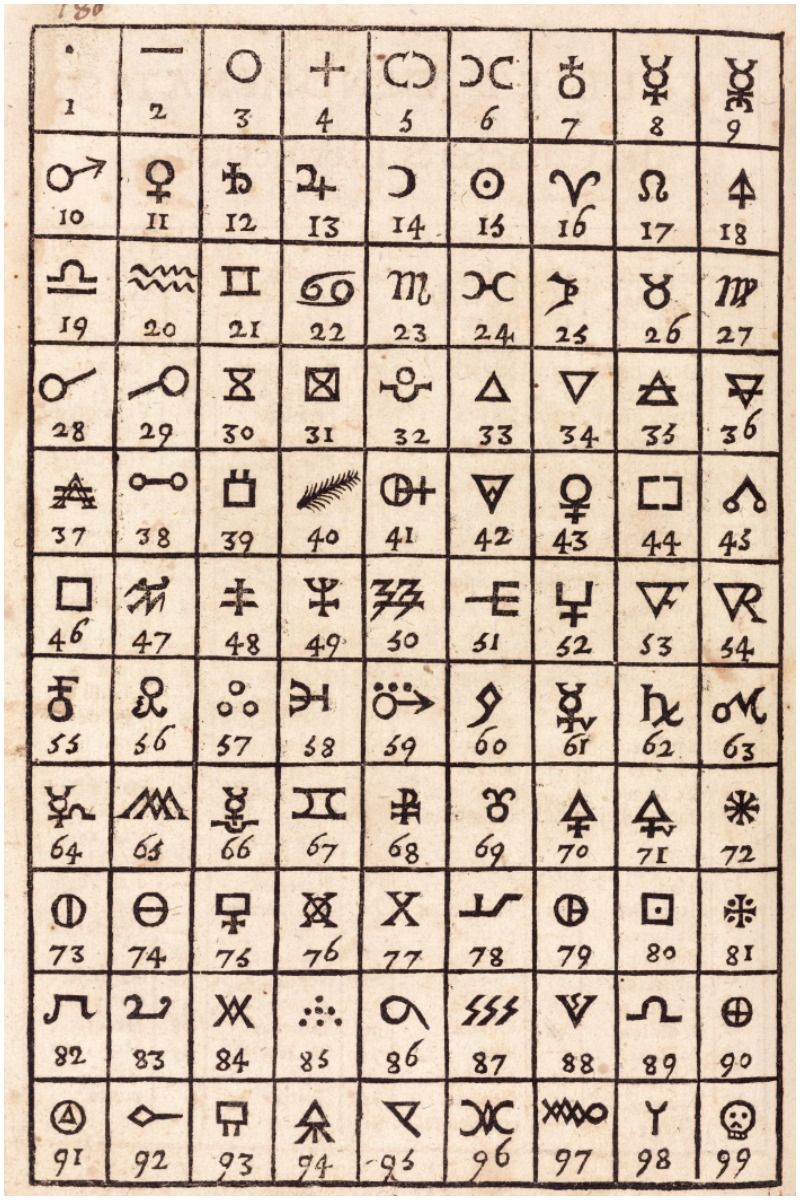 Arsenic is a chemical element with atomic number 33 and symbol As. Arsenic is a natural component of the earth’s crust and is widely distributed throughout the environment in the land and air.

Arsenic is naturally present at high levels in the groundwater of a number of countries. In ancient alchemical rituals, arsenic was used for both magical and medicinal cures.

Sulfur is a chemical element with atomic number 16 and symbol S. The name Sulphur is derived from the Latin word “sulphur,” which means “to burn.”

This element is historically referred to as ”brimstone” most likely due to the association with an odor of rotten eggs.

Lead is a chemical element with atomic number 82 and symbol Pb. It is toxic to humans. Lead represents the evil of the exterior natural world. 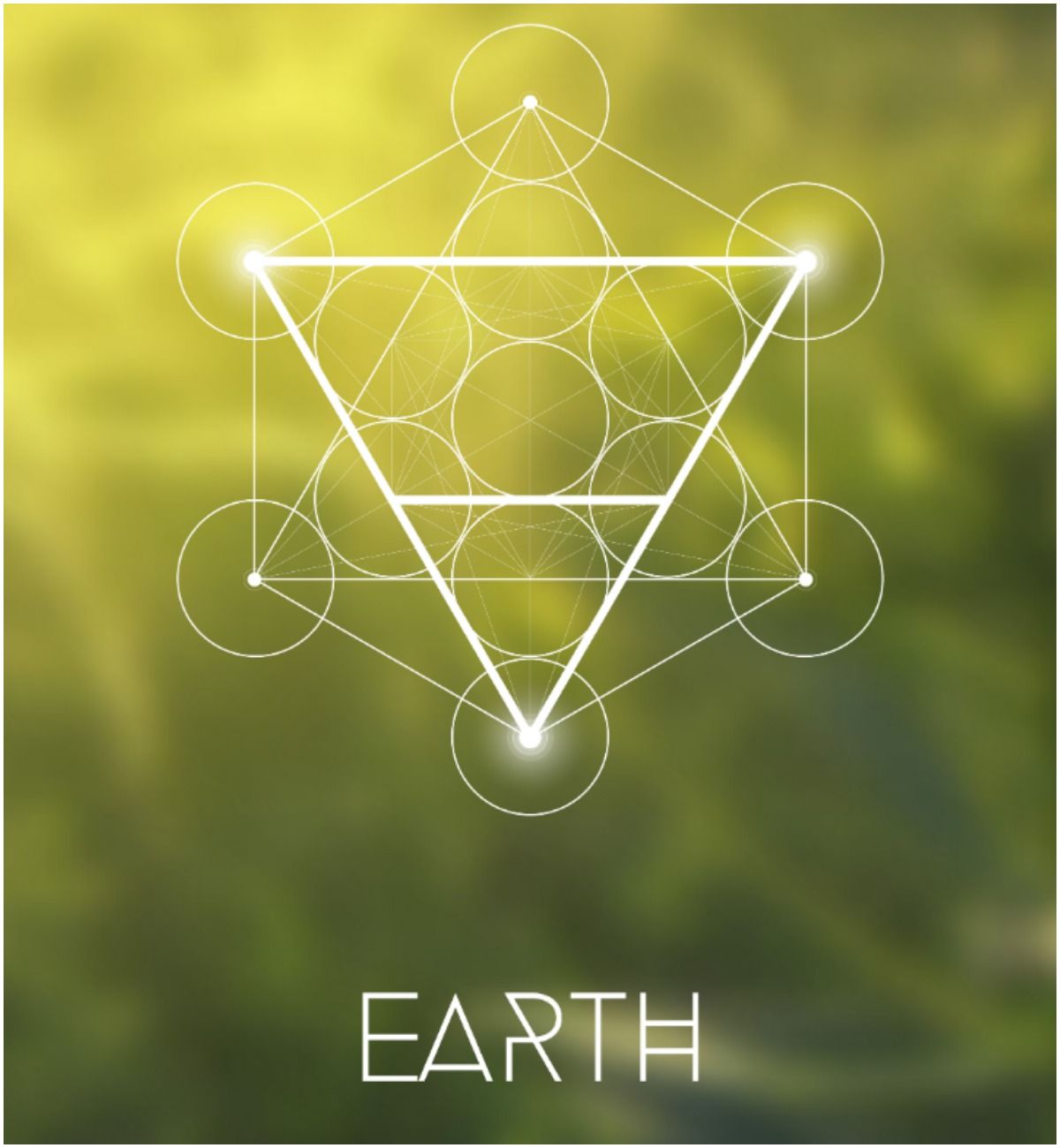 This element is symbolically described by an inverted triangle with a horizontal line running through it.

Earth is the element of groundedness, fertility, stability, potential, materiality, and stillness. 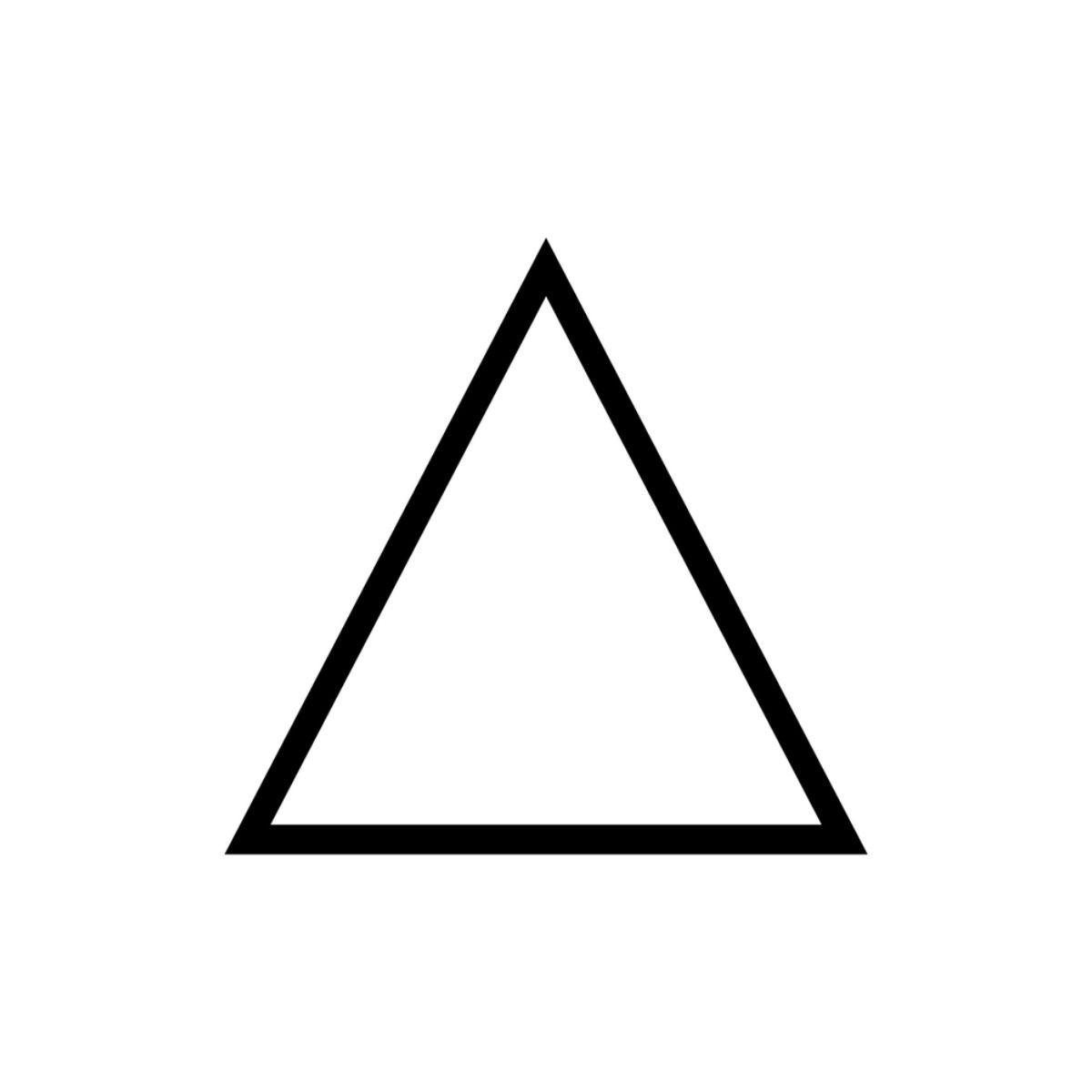 Fire is traditionally seen as the most spiritual of the physical elements due to its masculine properties.

Fire is often shown to depend on our “care” in order to survive.

In alchemy, fire is a catalyst to both initiating and completing metaphysical demonstrations.

Platinum is a chemical element with atomic number 78. The symbol for platinum is Pt, and comes from Spanish ”platina” meaning “little silver.”

This element aligns with the entire chakra system.

READ THIS NEXT: 11 Celtic Symbols