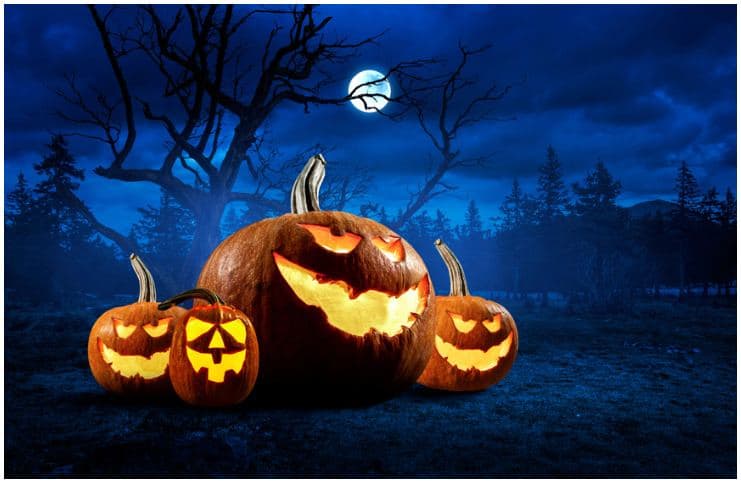 List Of 55 Halloween Quotes To Get You In The Holiday Spirit:

”My children are vampires. I don’t mean that they are going to dress as vampires for Halloween. I mean that, like vampires, they cannot be captured on film.”

”One year, I was a go-go girl for Halloween, and I got all this glitter eye shadow, my hair was poufy with braids, I was wearing all these different colors and fake eyelashes that went all the way up to my eyebrows. I totally enjoy the whole Halloween feel.”

”This Halloween, the most popular mask is the Arnold Schwarzenegger mask. And the best part? With a mouth full of candy you will sound just like him.”

”On Halloween, kids get to assume, for one night the outward forms of their innermost dread, and they’re also allowed to take candy from strangers – the scariest thing of all.”

”Halloween is one of my favorite days of the year. I have a strict rule: I don’t work on Halloween and I won’t travel on Halloween. Not for any reason.”

”I love Halloween, and I love spooky stuff. I love horror movies. I love everything creepy, and I’ve always kind of wanted to do this, just do really dark pop.”

”Halloween is bigger than Christmas in America. I’ve experienced it in New York, Los Angeles, and Washington D.C., and if you’re in the right neighborhood, every house is decorated with spooky ghosts, spider webs, and jack-o-lanterns.”

”I’m not a real Halloween kind of guy, because Halloween is every day.”

”If ever there was a holiday that deserves to be commercialized, it’s Halloween. We haven’t taken it away from kids. We’ve just expanded it so that the kid in adults can enjoy it, too.”

”If I wasn’t even famous or had any success, I would still wake up and put tons of make-up on, and put on a cool outfit. That’s always been who I’ve been my whole life, so that’s never gonna change. I love fashion. I love getting dressed up. I love Halloween, too.”

”There is nothing funny about Halloween. This sarcastic festival reflects, rather, an infernal demand for revenge by children on the adult world.”

”I wasn’t allowed to have sugar as a kid. We didn’t have candy or soda or anything, so Easter and Halloween were my favorite times ’cause I could eat as much candy as I wanted.”

”Halloween is one of my favorite times of the year.”

”On Halloween, don’t you know back when you were little, your mom tells you don’t eat any candy until she checks it? I used to be so tempted to eat my candy on the way to other people’s houses. That used to be such a tease.”

”I’m cool with people dressing up as Eleven for Halloween. I definitely want to open my door and give them candy.”

”Every Halloween for six years, I was a Ninja Turtle, and Mikey was my favorite. The turtles really made me who I am today. They got me into martial arts, meditation, surfing, skateboarding; big-time influence on who I am today.”

”I hate Halloween. I hate dressing up. I hate – I wear wigs, makeup, costumes every day. Halloween is like, my least favorite holiday.”

”I love Halloween. I love Thanksgiving. I love Christmas. I love New Year’s.”

”The great thing about candy is that it can’t be spoiled by the adult world. Candy is innocent. And all Halloween candy pales next to candy corn, if only because candy corn used to appear, like the Great Pumpkin, solely on Halloween.”

”I definitely do not like Halloween. I don’t like masks, creepy clowns, dark things, goblins or witches. They’re not just my thing.”

”I love Halloween, trick or treating and decorating the house. And I love Thanksgiving, because of the football and the fall weather. And of course, I love Christmas – that’s my favorite of all!”

”I understand Christmas, and I understand Easter. But Halloween is one of those things where, if you don’t grow with it? The French, they tried Halloween for a few years, and I think they’re dropping it.”

”Halloween simply has a special feel about it. School is back, everyone is settled into their routines following summer, and there is pumpkin spice everywhere.”

”I refuse to dress ‘hot’ for Halloween, ’cause I always have to have makeup and hair and look cute for my job. So on Halloween, I either go gory or weird or funny.”

”I love Halloween! I love it so much that I used to work at a haunted house every year.”

”Halloween is woke, and there’s nothing we can do about it.”

”When my son was little, we mothers always did the Halloween parties, and I would wear my orange-and-black Chanel. It comes in handy on October 31. I’m the chicest pumpkin around.”

”I’m a big fan of the first one, but one of the first horror films I ever saw on my own was ‘Halloween II.’ That was my first real experience of Halloween as a concept because in Sweden in the Eighties, we didn’t celebrate Halloween.”

”The worst thing about Halloween is, of course, candy corn. It’s unbelievable to me. Candy corn is the only candy in the history of America that’s never been advertised. And there’s a reason. All of the candy corn that was ever made was made in 1911. And so, since nobody eats that stuff, every year there’s a ton of it left over.”

”I always loved Belle from ‘Beauty and the Beast’. I always thought I looked like her, so I dressed like her for every Halloween.”

”No trick or treaters came to my house for Halloween. For some reason, people around here are scared of me.”

”Halloween isn’t the only time for ghosts and ghost stories. In Victorian Britain, spooky winter’s tales were part of the Christmas season, often told after dinner, over port or coffee.”

”The first horror film I remember seeing in the theatre was Halloween and from the first scene when the kid puts on the mask and it is his POV, I was hooked.”

”For many different reasons, my number one favorite horror movie is ‘Halloween II.’ I love the way it’s shot, and I love the way the synthesizer sounds on the score.”

”It’s said that All Hallows’ Eve is one of the nights when the veil between the worlds is thin – and whether you believe in such things or not, those roaming spirits probably believe in you, or at least acknowledge your existence, considering that it used to be their own. Even the air feels different on Halloween, autumn-crisp and bright.”

”South Africa is the only place in the Southern hemisphere where Halloween is really catching on. They have a lot of sporting events that have made it more popular there. They have motocross and rave celebrations, and they’re embracing it as a youth culture thing.”

”Halloween is one day of breaking out of your shell, one day you can be completely expressive, where the world gives you the license to dress up.”

”I love scary movies. I like blood and gore, and I love Halloween movies.”

”But I love Halloween, and I love that feeling: the cold air, the spooky dangers lurking around the corner.”

”I dressed up as a veterinarian for a Halloween costume party. I had the lab coat. I got a couple of stuffed animals for patients and put bandages on them.”

”All my life, I have been a celebrant of Halloween. For me, it is the most important day of the year, the turning point in the old pagan calendar.”

”I don’t remember that I ever really went all out to come up with a costume or a persona that could compete with everyone around me. I didn’t know what to do. I found Halloween scary for just that fact – it meant that I had pressure to get up and be scary, makeup and all that. That was pretty horrifying for me.”

”Halloween is all about being bold, daring, and creative! You get to be someone else for the night thanks to makeup and a costume. I pretty much do that on the daily, so I am not that big on Halloween, but I do appreciate a good costume and some incredible makeup.”

”I was the ghost-faced killer for Halloween in the third or fourth grade.”

”If human beings had genuine courage, they’d wear their costumes every day of the year, not just on Halloween.”

”I’ve made a career off of Halloween.”

”I’m a really big fan of all things macabre in general; Halloween happens to be my favorite holiday.”

”Some people are born for Halloween, and some are just counting the days until Christmas.”

”I love that in celebrating Halloween, we can get lost in the magic of make-believe and fantasy no matter what age we are!”

”My house is basically like Halloween, 365 days a year, with my son.”

”Halloween is not only about putting on a costume, but it’s about finding the imagination and costume within ourselves.”