The practice is an appeal to White Mahakala, who is an aspect of Chenrezig (Avalokitesvara).

White Mahakala is depicted as having six arms and three eyes.

He is often represented as wearing jeweled ornaments and a skirt made of scarves and jewels.

Deities connected with wealth, of which White Mahakala is only one, are commonly represented as holding wish-fulfilling jewels mounted on jewel-tipped handles. Mahakala is depicted as holding this type of staff.

His instruments indicate his ability to eliminate negative karma, attract positive energy, and provide spiritual as well as material prosperity.

For some, the idea of a Buddhist ritual for wealth accumulation may be surprising or even seem contradictory because Buddhism is often thought of as a belief system that requires renunciation of wealth.

However, this is not necessarily the case, as many aspects of Buddhism look upon wealth as a vehicle for generosity rather than avarice.

Further, poverty can be seen as an obstacle that may hinder one’s spiritual practice.

For these reasons, wealth accumulation is not necessarily in tension with Buddhist teachings. 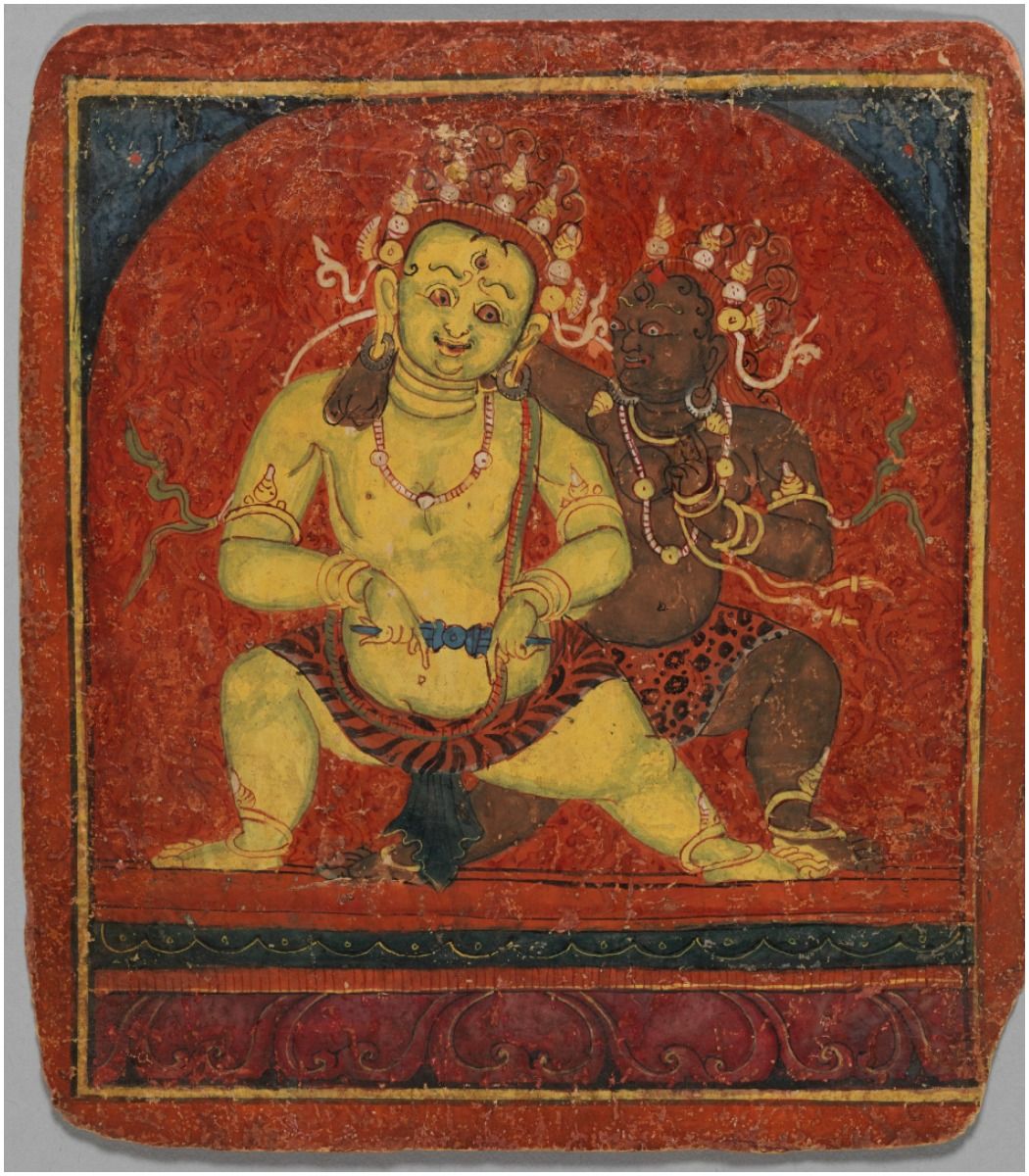 On the Buddhist account, wealth itself is neither virtuous nor unvirtuous—its meritoriousness depends on why a person is accumulating it and whether that person is using it to act generously.

This is why Mahakala is both a protector and meditational deity.

As the story goes, Chenrezig is described as having achieved an enlightened mind (bodhicitta).

Upon reaching the tenth stage of being a Bodhisattva (or enlightened being who agrees to stay on the earth), he elected to stay within the cycle of samsara (the unceasing cycle of life and death) to help liberate sentient beings from the endless suffering of life.

However, on an occasion of experiencing a moment of doubt regarding his choice to be a Bodhisattva, he violated a prior vow he had taken, and his body split in two. In response, Amitabha Buddha restored Chenrezig to a single whole, and at that time, Chenrezig took the form of the eleven-faced, thousand-armed deity of Avalokitesvara.

At that time, Avalokitesvara took the wrathful form of White Mahakala with the hope that his new form would help him to better protect sentient beings, particularly by granting wishes. Thus, White Mahakala is a wrathful form of compassion, and he demonstrates his compassion by helping sentient beings to transcend obstacles and attract positive influences.

This is why White Mahakala is often represented as standing on two human corpses. These are thought to symbolize the death of negativity and negative habits. Despite this foreboding imagery, White Mahakala is not known to harm sentient beings.

The mantra is part of a larger ritual that takes approximately one hour.

In the ritual, the speaker clears the area of negative influences and provides food offerings, which are taken outside and scattered around the area to be made available to the spirits.

Then, the guardians of the ten directions are invited to the space, and following them, the wealth deities arrive.

At that time, the practitioners wave a spiritual arrow of five colors and recite the mantra given above, which is repeated several times.

In the Buddhist tradition, the mantra of White Mahakala is thought to bring wealth and good fortune, particularly in business, spirituality, and family.

The idea is that the speaker will encourage improvements in their life circumstance by kicking off a karmic cycle of generosity by first acting generously themself.

Given White Mahakala’s emphasis on positivity and wish-granting, it is fitting that the mantra invokes positive energy and leads to the removal of obstacles blocking the flow of prosperity.

It is a way of generating karma in a fashion that leads to prosperity.