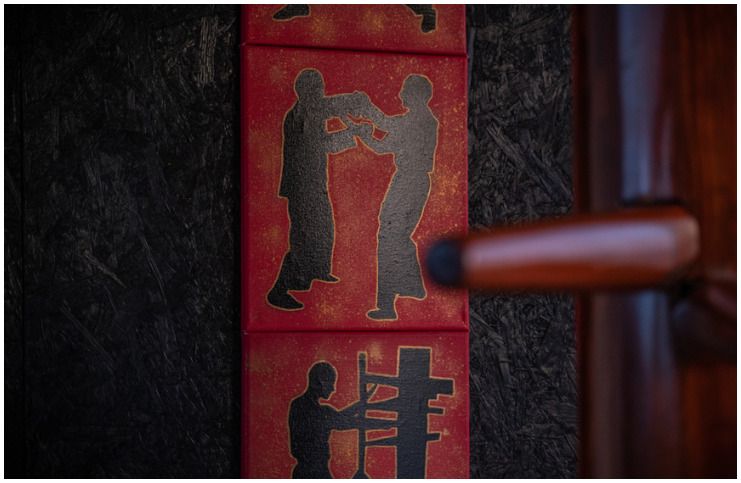 Ip Man, also known as Yip Man, was a Chinese martial artist of Cantonese ethnicity, and a master teacher of Wing Chun. He was the 3rd of four children and was raised by his wealthy parents, Ng Shui and Ip Oi Dor.

When Ip Man was 13 years old he started learning Wing Chun from Chan Wah-shun. Because of his sifu’s old age, Ip had to learn much of his techniques and skills from his master’s 2nd eldest disciple – Ng Chung-sok.

In 1949, when the Chinese Communist Party came to power, he fled to Hong Kong, where he opened a Wing Chun school, becoming the first martial arts master to train students publicly.

His most famous student, Bruce Lee, came to study with him in 1953. Lee remained a lifelong friend.

Man was married to Cheung Wing Sing and they had 2 sons. His sons have played a major role in continuing the Wing Chun legacy began by their father.

#1 ”Do not fight with the strength, absorb it and it flows, use it.”

#2 ”Students from the same teacher will differ in their skills”

#3 ”Yong Chun and Wing Chun both stem from Shaolin, but if you were to believe that they are one and the same, then you will be far from the truth!“

#5 ”Although martial arts involves armed forces, Chinese martial arts is Confucian in spirit. The virtue of martial arts is benevolence. This is something that the Japanese will never understand, for they learn martial arts only to become stronger and terrorize others. They are not worthy of learning our martial arts.”

#6 ”I didn’t come here today to prove which is better, Chinese or Western boxing. All people have different status in life, I don’t believe that one person’s integrity is worth more than the others. I hope that we can start to respect each other.”

#7 ”Accomplishment uses diligence as a goal.”

#9 “The ideal in Martial Arts is humanitarianism.”

#10 “All punches thrown are in a rectangular shape, resembling the Chinese character for the sun; we start from the heart and throws a straight-lined punch, acting in the form of the string on a bow. If the opponent throws a punch in the form of a hook or a hyperbole, that attack comes in the formation of a curve, much like the shape of the actual handle on a bow. We call these moves riding along the bow. Simultaneously, even compared to a straight punch that starts from the waistline, Wing Chun’s version is still of a shorter distance; therefore, all of our punches move strictly from the area near the heart.“

#11 ”Take it easy! You’re both young men. Injuries are inevitable in friendly fights. I’ll visit your master and explain to him. May I know who your master is?”

#12 ”People will grow old. No one is invincible forever in this world.”

#14 “There is no difference in who started to study first; the one who achieves accomplishment is first.”

#15 ”Good kung fu does not depend on age or sex but on how well you fight.”

#16 ”At that time, most of the people who learned kung fu were rich people. These people could leave their jobs and live in the old temples in deep mountains for training. It is not the same as today when people can easily learn kung fu anywhere.”

#17 ”No men are afraid of their wives, they’re only men who respect their wives.”

#18 “We all have inner demons to fight, we call these demons, fear and hatred and anger. If you do not conquer them then a life of one hundred years is a tragedy. If you do, then a life of a single day can be a triumph.”

#19 ”Greet what arrives, escort what leaves and rush upon loss of contact.”

#20 ”When I learned under Wah Kung, he was already 70. He was a bit weak at that time. However, he still corrected my mistakes with great patience. Furthermore, he also told his other students to teach me. As a result, my techniques improved at high speed.”

#21 ”You know Captain Li, we martial artists are energetic. Sometimes we might be a bit too loud but that doesn’t mean we’re not civilized. We’re civilized folks, please don’t pull the gun. Cut me some slack.”

The real Ip Man! It's great to have a movie that brings to light the art of Wing Chun. But its very important to acknowledge the actual person who started the movement. He was much more than simply Bruce Lee's sifu (teacher). He opened the door to what has become an internationally known system of devastatingly effective hand to hand combat. When it comes to close-quarters self-defense, experts the world over look to those trained under the Ip Man line of Wing Chun for effectiveness. It's very important that we acknowledge the real Ip Man for what he gave the world. And those of us who are Wing Chun practitioners will forever be grateful! – – – #therealipman #ipman #yipman #realipman #realyipman #ipman #wingchun #wingchun #wingtsun #Kungfu #gungfu #selfdefense #h2hcombat #closequarters #sifu #kungfumaster #wingchunmaster #grandmaster

#22 ”Wah Kung only admitted 16 students since opening his kung fu school. I was 11 years old when I became his student during his later years.”

#23 ”Relax and calm your mind. Forget about yourself and follow your opponent’s movement.”

#24 “This nickname does not represent my instructor’s character. Other than ‘Wah the Money Changer’, he had also a less graceful nickname. ‘Ngau-Chin Wah’ of ‘Wah the Bull’. He was the head student of Dr Leung Jan”.