Sleep paralysis is a feeling of being unable to move, either upon awakening or at the onset of sleep.

Episodes are commonly accompanied by hypnagogic experiences, which are auditory, visual, and sensory hallucinations.

According to Michael Breus, Ph.D. – “Most patients say the same thing to describe sleep paralysis: that it feels like you woke up dead. You know that your mind is awake and your body is not — so you are trapped, basically.”

The events can last anywhere from five seconds to several minutes, with rare cases lasting for a few hours, where the affected individual could well experience panic symptoms.

Worldwide, about 8% of the population has experienced sleep paralysis. Interestingly, the number jumps to 32% for psychiatric patients.

It commonly starts during adolescence, and it can become frequent during the 30s.

People with the condition may:

Note – you will be able to speak and move normally afterward; however, you may feel anxious and unsettled about going to sleep again.

One REM-NREM cycle lasts about 90 minutes, and NREM sleep occurs first and takes up to 75 percent of the overall sleep time.

During rapid eye movement sleep, the eyes move quickly, but the body is relaxed.

Sleep paralysis may be associated with:

When to Call the Doctor

See your doctor if you have any of these concerns:

For most people, there is no treatment for this condition.

The most important thing is prevention and the treatment of any underlying health issues.

You can help decrease your chances of experiencing the condition by focusing on the fundamentals of healthy sleep, which include:

Note – try to sleep on your left side or on your belly as sleeping on your back increases the risk of experiencing sleep paralysis. 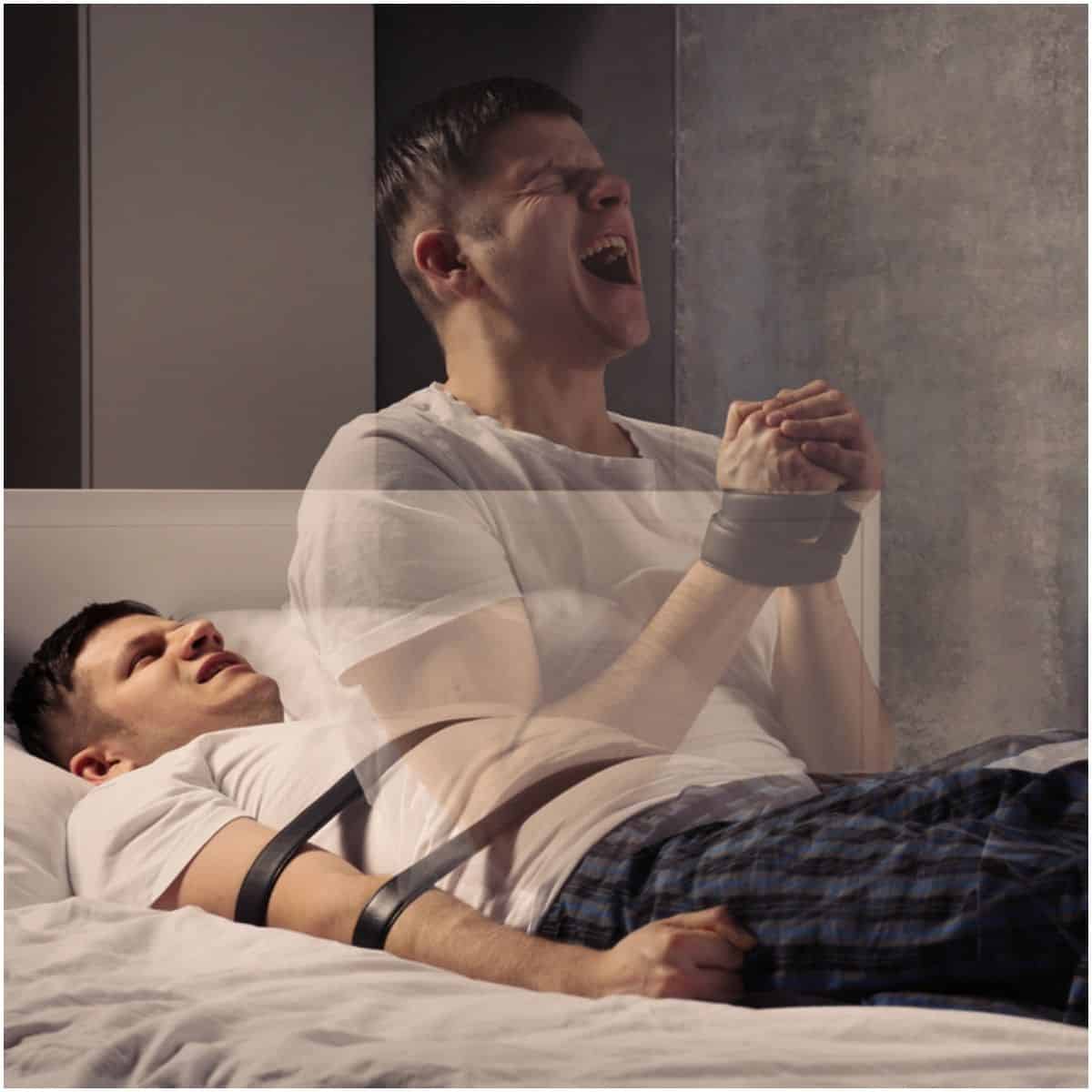 Sleep paralysis is linked to the desire to get away from something, to avoid something: are you trying to avoid or oppose a situation, person, or responsibility?

Your life seems so unbearable that you want to “escape,” become insensitive, because you live under the impression that there is no solution to your problems, and you are not able to take on your responsibilities.

You may have experienced a trauma that demands you to “stop” living because it is too much.

Your thinking may also be very rigid, and if things do not happen the way you want, you tend to back off, escape.

According to Scandinavian folklore, sleep paralysis represents contact with demons. In Newfoundland, the phenomenon describes an old woman who leaves her body at night and tries to suffocate her victims.

In Malay (an Austronesian ethnic group), the phenomenon is known as “kena tindih” (being held down).

In Africa, the phenomenon is called “Ogun Oru,” meaning “night war.” It is considered a cause of spells or spirits who return to the material world to punish certain people. The African people have an interesting way of escaping these manifestations: Christian prayers.

In East Asia, the condition is known as “ghost oppression,” building upon a Chinese belief that an individual’s soul is vulnerable to the influence of evil spirits during sleep.

Moreover, in some parts of the world, sleep paralysis is called the “old hag.” Also, in Mexico, the condition is referred to as “dead person on you.”

Sleep paralysis is somewhere between pathology and fantastic, between the shadows of the spiritual world and the boundary of the material world.

Probably more studies will build opinions on the phenomenon and perhaps even delimitate it from other phenomena similar to it.