Sanskrit is considered to be the “perfect language,” as its correct pronunciation stimulates a unique, higher vibration, placing into motion whatever the practitioner is trying to manifest with the mantra.

According to scholar and philosopher Nicolai Bachman, each Sanskrit mantra has general or specific effects on oneself or the world, and Sanskrit originated as the language of the mantras.

The word mantra is also used to represent any utterances, thoughts, or other series of words that are supposed to have magical healing power or spiritual efficacy.

Every mantra activates a specific type of energy that manifests in different parts of the body. Furthermore, the true value of the mantras lies in their vibrational quality, not in any meaning or translation that humans have placed on them.

What Is Mantra Meditation?

Using a mantra can be a group or solitary activity. It may be done as a mantra meditation practice, where you sit to recite a particular mantra again and again, in your mind or out loud.

Reciting a mantra while you’re meditating helps circle back to the simplistic approach to life and suppress the distractions and thoughts which arise on the mind surface.

When you practice mantra meditation, you tap into an ancient practice that has been performed for thousands of years that can inspire you and truly make you happy.

Moreover, the regular practice of this spiritual technique will produce a specific healing vibratory frequency within your physical body and may help you center in the core-sheath.

The revered sounds produced by a mantra recitation will also help you to disconnect from the thoughts filling your mind so you may slip into the space between thoughts.

Note – if you use them in a specific method, they become a key to open up a different experience and dimension of life within you.

Practicing the Ganesh mantra will protect and bless you with prudence, abundance, good health, and success.

This Ganesh mantra starts with seed mantra Om – which is commonly referred to as the primordial sound of the Universe. It is a universal mantra and is also considered the ultimate vibration because it contains the quintessence of the entire creation.

Additionally, when you recite this mantra, you are actually calling upon the potent energy of Lord Ganesh, who is acknowledged as the Lord of Beginnings and the Remover of Obstacles.

The elephant-headed deity removes the external and internal hindrances of your success, and He is the one that grants the opening of your material and spiritual gifts. Lastly, Lord Ganesh is the protector of all beings.

This mantra is practiced in praise of the Sun God, also known as Surya. He is the chief of the nine Classical planets (better known as the Navagraha) and the main solar deity in Hindu tradition.

In addition, He is the only God visible to us every day (the pratyakshadaivam) – the giver of energy to the world. To invoke Lord Surya, numerous Hindu sacred mantras are recited daily by many practitioners around the world.

More importantly, chanting the Surya mantra cures any eye-related diseases and helps to improve the eyesight of the practitioner.

It is a mantra dedicated to Goddess Saraswati, the mother goddess of wisdom, music, knowledge, arts, and craft. It is acknowledged that worshiping Maa Saraswati with sincere devotion will remove all the hindrances (both spiritual and material) that one will encounter during her or his life on this planet.

It brings positive healing energy to the life of students and even experienced professionals across the world.

This is another mantra dedicated to Lord Ganesh, which can be a potent instrument to create lasting change in your life and stir the mind of the practitioner.

It is advisable that before starting any new project or work, to practice this mantra (108 times with correct pronunciation and before sunrise – for maximum benefits).

According to some Hindu scholars, practicing this mantra with sincere intentions offers positive results.

Lokah Samastah Sukhino Bhavantu is approximately translated in English – “May all beings everywhere be happy and free.”

It is a soothing mantra that encourages compassion, cooperation, and living in harmony with fellow human beings, animals, and the environment.

Furthermore, it is usually used in the context of different rituals and prayers performed in the Hindu tradition and calls us to look mindfully at our words, thoughts, and actions.

However, Lokah Samastah Sukhino Bhavantu mantra does not appear in any of the Veda shakhas but it is a sincere expression of the universal spirit that we find therein.

Green Tara is the most famous female Buddha in the Tibetan Buddhist tradition. She is considered to be the female counterpart of Avalokiteshvara, the Bodhisattva of Compassion.

Green Tara mantra can be recited in times of danger, for encouragement, for health, or to become fearless, just like Tara.

”I prostrate to the Liberator, Mother of all the victorious ones.”

READ THIS NEXT: 11 Most Popular Tibetan Buddhism Mantras With Their Meanings 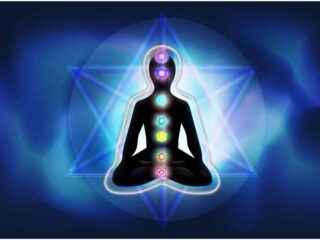 Thank you for this! I added it to my favorites.

Mantra does not mean sound tool in Sanscrit. It means mind protection.