Guru Rinpoche mantra (also known as Padmasambhava) is another name from the Vajra Guru mantra. Padmasambhava, the ”Precious Master,” is the spiritual founder of Tibetan Buddhism and the second Buddha of our time.

“The Buddha said that when we dedicate merit, it is like adding a drop of water to the ocean.

Just as a drop of water added to the ocean will not dry up but will exist as long as the ocean itself exists, so, too, if we dedicate the merit of any virtuous deed, it merges with the vast ocean of merit that endures until enlightenment.” – Padmasambhava’s quote. 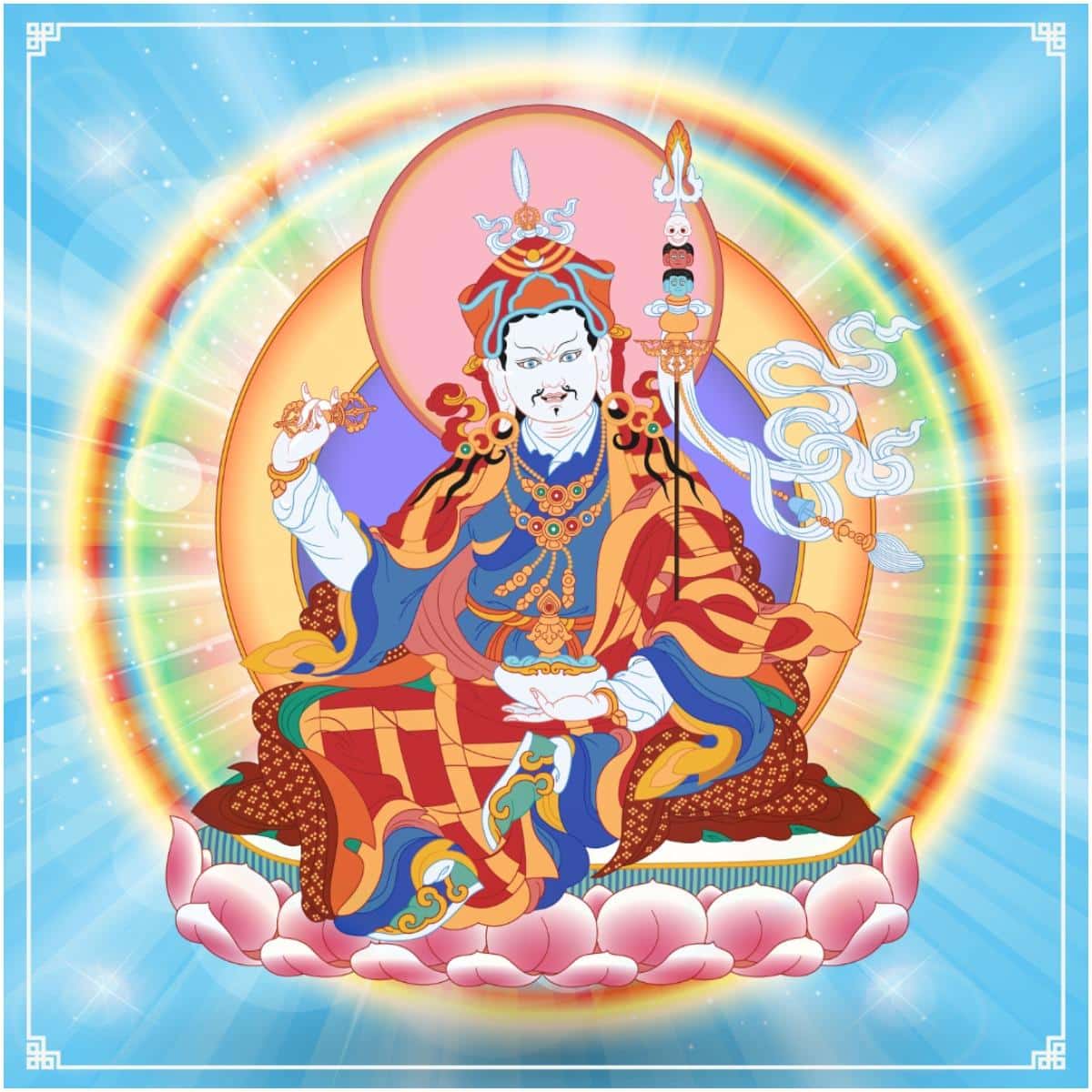 Moreover, a quote from Karma Lingpa in his book – The Syllable by Syllable Commentary Explaining the Benefits and Advantages of this Buddhist mantra:

“Even if you are not able to recite the mantra for whatever reasons, you should mount it on the top of a victory banner, even when the wind touches it, and that wind touches sentient beings, it will free them without a doubt. Alternately, you may inscribe it in clay or carve it in stone. This will also guard the path upon which these syllables are placed and guard that region against malevolent effects.”

Karma Lingpa also said – ”You may also write this mantra out in gold ink on dark blue paper and wear it as an amulet.

When you die, if this amulet is burned with your corpse, rainbows will be seen, and your consciousness will be transferred to the realms of Supreme Bliss.

The benefits of writing out, reciting, or reading this potent mantra defy any accurate measure and defy any standard measurement that could be applied. Having established this for the benefit of beings in the future, I am hiding this treasure.

May it meet with a fortunate child of mine in the future who has good karma.”

Dilgo Khyentse Rinpoche, a great Tibetan spiritual master, explained in his book Guru Yoga the essence of Tibetan Buddhism and the importance of the guru in one’s life, both physical and etheric. The bond to Guru Rinpoche starts with Padmasambhava Mantra.

“When thoughts arise, we imagine ourselves once more as Vajrayogini, with Guru Padmasambhava above our head. There is no need to do an elaborate visualization of the retinue and all the other details. Simply maintaining the presence of the guru above our head, we carry a strong feeling of devotion throughout all our daily activities.”

When you are eating food, visualize the guru at your throat center and offer him the first portion. When you are walking, imagine that he is above your right shoulder, as if you were circumambulating him. Whenever you wear new clothes, first offer them to the guru, and then wear them as if he had given them back to you.

At night, when you are about to fall asleep, visualize Guru Padmasambhava in your heart center, the size of the first joint of your thumb, sitting on a four-petalled red lotus. He is emanating countless rays of light, which fill your whole environment, melting the room and the entire universe into the light and then returning to absorb into your heart.

Then the guru himself dissolves into light. This is the state in which you should fall asleep, retaining the experience of luminosity. If you do not fall asleep, you can repeat the visualization again.

When you wake up in the morning, imagine that the guru emerges from your heart and rises up to sit again in the sky above your head, smiling compassionately, amidst a mass of rainbow light.

This is how we can remember the guru and apply devotion during every activity. And should death come suddenly, the best practice then is to blend our mind with the mind of the guru.

Of all the sufferings of the three intermediate states, the most intense are the suffering of the moment of death. For this moment, there are practices of Phowa or the transference of consciousness to the buddha fields. The practice of Guru Yoga is the most profound and essential way of doing Phowa. …” – Dilgo Khyentse Rinpoche’s quote:  from Guru Yoga book.

Read on insightstate about other soothing mantras, like Chenrezig Mantra or Vajrasattva Mantra.

READ THIS NEXT: The Seven Line Prayer to Guru Rinpoche Padmasambhava