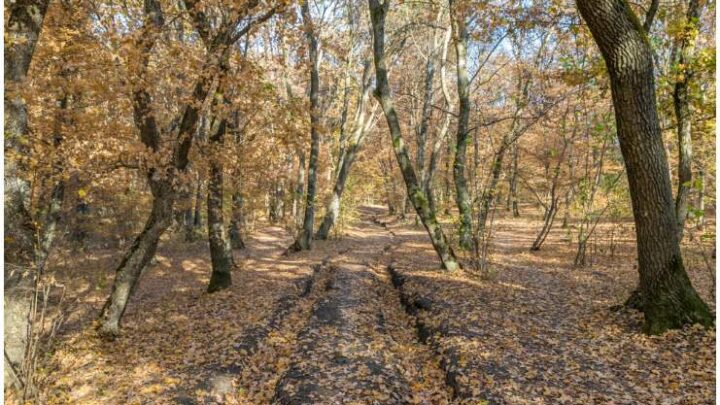 #2 The forest has an area of 3 square kilometers (1 square mile).

#3 It is better known as the ”Bermuda Triangle of Eastern Europe.”

#4 The Romanian name ”Baci” is translated as “sheep herder” and has an interesting legend, about a flock of 200 sheep which went into the forest and never returned.

#5 According to another legend, a five-year-old girl disappeared into the forest and didn’t come out for five years. When she returned, the girl was wearing the same clothes she was wearing when she disappeared 5 years ago, plus she hadn’t aged one bit.

#6 Local folks believe this forest is haunted by the ghosts of Romanian peasants and those who visit this area will never return.

#7 Moreover, this forest was a taboo subject for a long time, because the locals were afraid to even talk about it since the place was considered to be dwelled and cursed by negative entities.

#8 According to some paranormal researchers, this area is a portal to the spirit world or another dimension.

#9 This place gained global recognition as a UFO hotspot in the late 1960s.

#10 In the 50’s, a biologist named Alexandru Sift (1936-1993) alleged that on his traveling inside the forest he saw strange shadows among the trees, following him.

#11 On August 18, 1968, a 45-year-old military technician from Cluj – Emil Barnea, produced a remarkable photograph of a UFO over the forest’s Round Meadow.

#12 This zone soon became popular among experts in the esoteric and paranormal domains, drawing whole teams of esteemed researchers from the United States, Germany, and Hungary.

#13 Many individuals who live near this forest have made numerous orb-like lights photos inside the tree line.

#14 The last video footage of a UFO above the Baciu forest was taken in 2002 by two people from Cluj-Napoca who lived on the top floor of a building on the outskirts of Mănăştur neighborhood.

#15 Furthermore, numerous trees in the forest are twisted, distorted, and misshapen to the point they resemble something out of a bad dream.

#16 Many tourists and locals who enter the forest, report experiencing intense nausea, anxiety, tinnitus, or migraines. In addition, other visitors emerge with inexplicable scratches, rashes, and burns on their skin.

#17 Another interesting phenomena experienced by many people entering this forest is the “missing time”. According to some local stories, some people who ventured into the forest for a short time, only to exit and find search parties out looking for them.

#18 The total count of disappearances is believed to be over 1,000 people. Some have been found dead some years later with no signs of trauma to their bodies.

#19 Within this strange forest is a circle that no tree will grow in.

#20 Soil tests done by scientists have not been able to explain this anomaly, as they seem to match the surrounding soil and theoretically, there should be some types of trees growing there.

#21 A book (in Romanian) about the UFOs and the alleged paranormal activity in the Hoia Forrest is: ‘Fenomenele de la Pădurea Hoia’, published in 1995, by Professor Adrian Pătruț.

#22 Any aircraft in that part of Transilvania (there is a military base in close proximity) are not allowed to fly between 9 p.m. to 7 a.m., so the strange lights cannot be photographed from above.

#23 Similar areas like the forest of Hoia Baciu can be found in Norway, Tibet, and the Mojave Desert.

#24 In 1994, another strange phenomenon was noticed. The pine trees in the forest were uprooted and their logs were red.

#25 Professor Adrian Pătruţ claims that there is a center of maximum activity of the paranormal phenomena within this forest.

#26 In 2019, Hoia-Baciu Forest is the victim of illegal deforestation, according to the producers of the film “The Hoia-Baciu Forest – Truth or Legend.” In addition, they said that in the middle of ”Poiana Rotunda,” the famous unspoiled area, a forest road was built illegally.

#27 In 2016, rock star Alice Cooper has posted a photo of the haunted forest Hoia-Baciu near Cluj, and has asked millions of fans if they have enough courage to venture there.

#28 In 2019, an event was organized in Hoia Baciu Forest during which participants must escape from the haunted forest using all available means. The event started at 19.00.