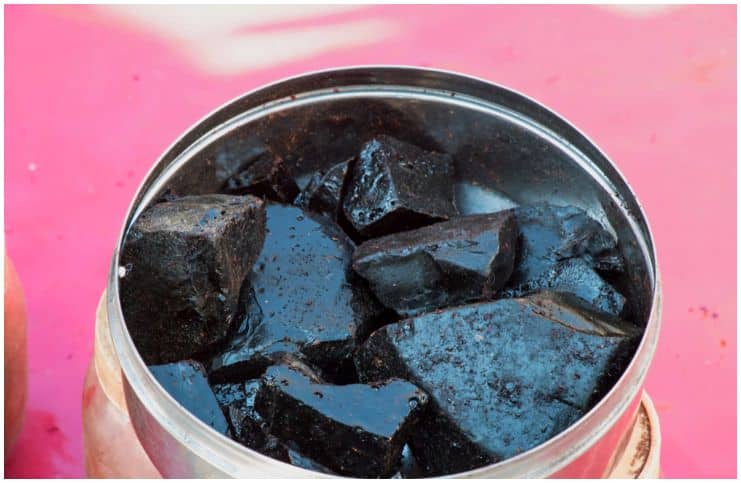 Despite the constant progress of medical and pharmaceutical sciences and the development of new drugs, Shilajit was used for thousands of years by various cultures for healing, this is compelling proof of its efficiency.

The array of ailments, which Shilajit is used for in traditional medicine is so wide, that is received a reputation of panacea substance. In support of “traditional” myths is know that Shilajit has multiple substances in it, with have a profound therapeutic effect.

Chemically Shilajit is a highly complex substance. There are multiple past and ongoing studies on Shilajit. Surgeons have probably studies Shilajit most extensively, the reason for that is because Shilajit speeds up tissue regeneration and healing processes.

Once purified into resin, quality Shilajit from various geographic regions is not substantially different from each other. One can identify though slight differences in percentages of electrolytes and some other substances.

OF WHAT SHILAJIT CONSTITUTES

At this point is understood that Shilajit contains over 80 components, which are life important for a human body, including antibiotics of plant origin, anticoagulants, and about 30 chemical elements.

In some types of Shilajit, the researchers found carbon, hydrogen, and nitrogen. There are essential and non-essential amino acids, more than 10 various metal oxides, oils, fatty acids, vitamins B1, B6, B12, and others, humic substances, auxins, inhibitors, chlorophyll, enzymes, hormones, and other substances.

The isotope analysis of Shilajit resins proves that the age of Shilajit may range from several tens to several hundred years. Some samples of Altai Shilajit / Mumie reach up to a thousand years ago.

Doctors when healing a patient, generally treat not the cause of the ailment, but rather its symptom, using different drugs.

But in reality, any ailment of a human body can be described a disbalance of electrolyte balance or in other words homeostasis, which characterized the state of a body as a whole, where everything should be in perfect balance with each other.

Knowing the interconnection of, and interrelation of isolated elements, by getting rid and adding the missing link, one can effectively diagnose and treat the cause of an ailment, and therefore rid of the symptoms.

The challenge of such “prescriptions” is that the interaction of intercellular and extracellular balance of full spectrum of substances is not completely understood, there are pure technical difficulties to that at the present time.

Any pharmaceutical drug usually contains only several chemical elements, Shilajit contains a half of the chemical periodic table, plus many life important substances.

The most important feature of Shilajit is, that it is not a stimulator, which would inhibit certain body functions. Instead, it is a biogenic regulator, which utilizes its components to comprehensively fill in deficiencies in a body, therefore regulating homeostasis and ridding of an ailment and its symptom. Clearly, this process is much more complex than our simplified description thereof, but the bottom line is this.

According to ancient texts, Shilajit gives strength to the whole body and especially the heart. It obliterates the rheumatic process, normalizes functions of internal and external organs, heals various forms of paralysis, aids the digestive process, heals elimination problems, fixes stuttering, dissolves some forms of tumors, helps with joints and bones ailments.

Shilajit is particularly useful to heal fracture and wounds, it also has a very pronounced overall strengthening effect on a body.

There are antibiotic-like substances in Shilajit, the efficacy of which exceeds penicillin. Shilajit is a reliable and efficient mean to heal certain infections, in particular, dysentery, as well as inflammation-related processes – angina, bone tuberculosis, fungus infections, and some eczema types.

Due to being biologically stimulating and the presence of a large number of microelements, Shilajit speeds up tissue regeneration and is effectively used to treat, bone fractures, bruises, wounds, burns, frostbite, and trophic ulcers.

Scientists constantly expand the list of ailments, which can be addressed with the qualified use of Shilajit. It was shown at the time, that Shilajit does not only have remarkable antimicrobial and blood anticoagulation qualities, which is quite important while treating the heart- vascular diseases, but also enhances the activity of the immune system, improves the mineral metabolism in the body, improves eyesight.

A rigid regiment of Shilajit, improves memory and brain activity.

Shilajit bases ointments are rather efficient in treating of puss wounds trophic ulcers and rid of allergic skin inflammations.

Adaptogens a  normalizing effect, i.e. counteracting or preventing disturbances to homeostasis brought about by stressors. Moreover, adaptogens are innocuous with a broad range of therapeutic effects without causing any major side effects)

Shilajit activates multiple enzyme systems in the body, contributing to improved biochemical reactions in an organism. The most studied property of Shilajit is the regenerative effect, which contributes to fast healing of wounds, burns, trophic ulcers, pressure ulcers, and expediting regrowth of fractures. The high efficacy while treating such ailments as strokes, heart attacks – is also explained by the regenerative effect of Shilajit.

By stimulating the immune system of an organism, Shilajit certainly increases resilience to infections and extreme colds. It also makes tissues more resilient to hypoxia.

It affects the cellular content of blood and therefore can be used to address anemia, lowered hemoglobin. It can be used as a cholagogue (bile-expeller). Shilajit has a double effect on stomach acid formation: stimulating – when the processes are hyper acidic and inhibitory – when the environment is hyper acidic. In some cases, Shilajit was used as an anti-allergy mean.

Shilajit does not have a teratogenic action and substantially stalls experimental tumors (lab-induced adenocarcinomas). To reiterate, Shilajit is a complex natural organic-mineral complex of biologically active substances, which has multiple chemical substances.

This nature created and unique combination of microelements, amino acids, lipids, tannic substances, and vitamins, exist in Shilajit in their optimal states and proportions in terms of their bioavailability and efficacy for medical treatment.

An upset microelement balance in a human body causes dysfunctions of many life important organs and systems. For example, science knows the relations ship in a body of a combination of microelements (chrome, nickel, manganese, and iron) and cardiovascular diseases. Or copper, for example, is important in the processes of blood creation, it increases resistance to infections and is important for normal hair growth.

A zinc disbalance increases the occurrence of skin diseases, including the appearance of pimples and eczema, this element is very important for normal functioning of endocrine glands and bone development.

In any case, Shilajit should be taken as a prophylactic measure and in case of an ailment, at the early stages of an ailment progression.

Quality Shilajit is not toxic even in doses, which substantially exceed the therapeutic ones, the substance does not have a carcinogenic effect and does not affect a conception ability. Most serious scientists do stress though, that Shilajit by itself is not a panacea.

It has the most effect, when used with other therapeutic herbs and extracts. But one should never attempt to heal anything, without having an exact diagnosis and understanding how Shilajit and combinations thereof can be applied.

At the present time, extensive experimental and clinical material permits a conclusion, that Shilajit has regenerative properties. It is an adaptogenic biostimulator, which has a positive influence on a human organism, metabolism processes, phagocytosis, neurohumoral system.