Since we were children, we have heard tales about wishing on shooting stars and the good luck associated with them.

As we grew up, you learned about the science behind shooting stars and why they occurred.

For many, the magic and spirituality associated with a shooting star never faded – and for good reason!

Shooting stars are rare and quick, which means spotting one is a unique experience and deeply connected to the spiritual world in many cultures. Keep reading to learn more about what shooting stars are and the true spiritual meaning associated with them.

What is a Shooting Star?

Many people never forget the first time they see a shooting star.

You feel surprised, lucky, and amazed!

This can be due to the fact that people are not used to seeing shooting stars and do not actually know how they come to be.

Learning about this process does not diminish the power of the shooting star; in contrast, it helps maximize it because you realize just how rare of an occurrence it truly is.

Despite the name, shooting stars are not technically stars at all!

When a small piece of rock or compressed space dust enters our atmosphere, it moves incredibly fast.

This speed causes it to ignite and glow as it streaks across our sky, creating the iconic shooting star.

A shooting star is also known as a meteor, and it will typically burn up in the atmosphere.

If a shooting star crashes down to earth, it becomes a meteorite!

Astronomers estimate that in a truly dark setting, you may see shooting stars a few times per hour.

With the increased light pollution from cities, it can be hard to spot them when they occur.

That makes the experience even rarer – to spot a shooting star in a city despite the light pollution, it must be very large and powerful!

While science has revealed a lot about how shooting stars are formed, the magic and allure of these phenomena has not faded.

Since the dawn of time, shooting stars have enchanted humanity and become powerful spiritual symbols across many different cultures.

Spiritual Representations of a Shooting Star Across Different Cultures 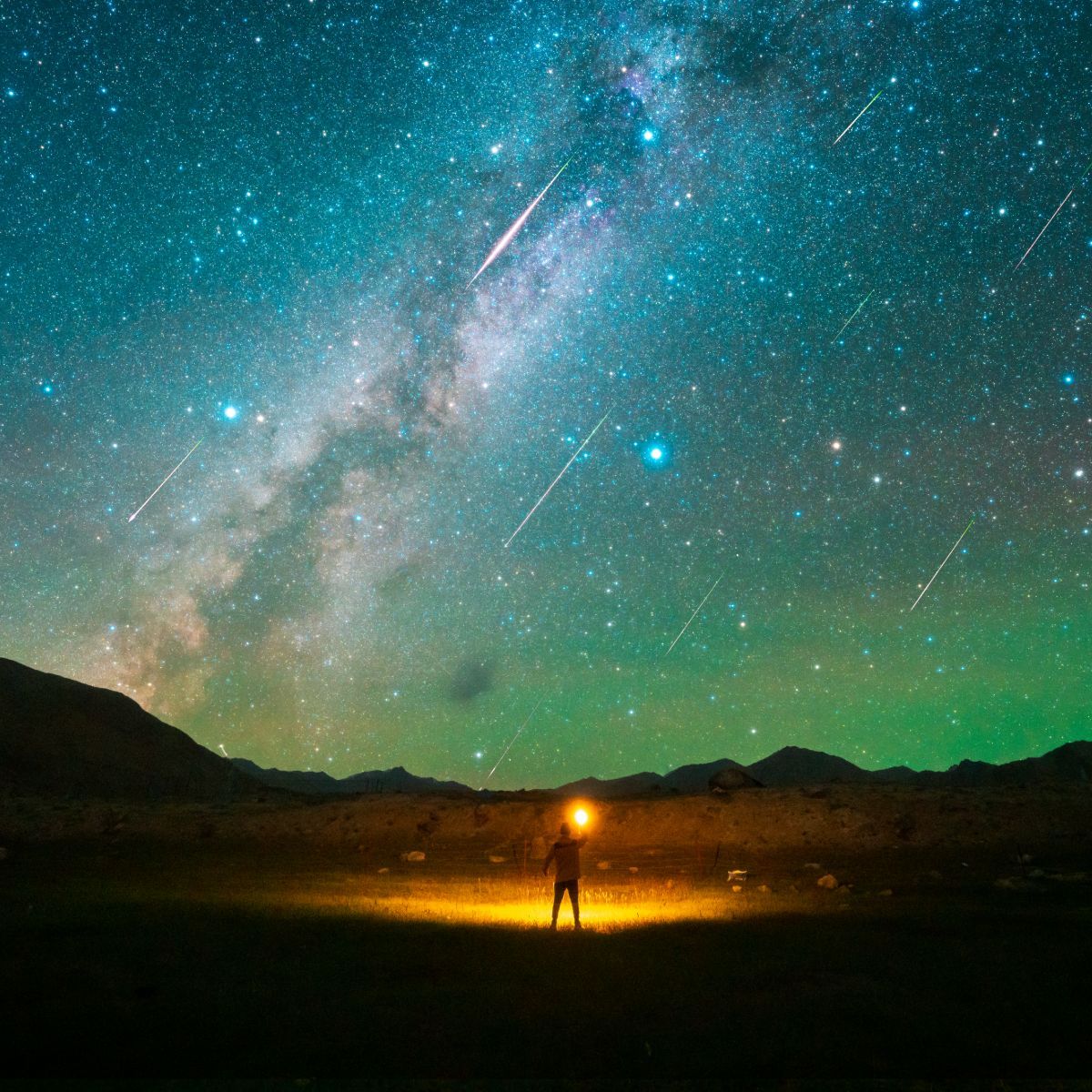 Shooting stars can appear anywhere in the sky, and as a result, have been entrenched in many different ancient cultures.

The way these cultures viewed shooting stars differed, with some seeing it as a positive and others as a negative, but in general, it was always a sign of things to come.

The Roman astronomer Ptolemy in the second century theorized that shooting stars were signs of the gods peeling back the sky to examine the events on Earth.

Romans also believed that shooting stars symbolized divine favor and protection from the gods against things to come. Essentially, it was a sign that their actions were approved by heaven.

In Chinese mythology, a shooting star symbolized the birth or death of an incredibly important person.

This is also a belief in many Native American cultures, including the belief that shooting stars were the souls of people being carried to the afterlife.

However, some East African tribes feared shooting stars as a sign of a bad omen approaching or a powerful god manifesting themselves. Other cultures similarly approached shooting stars with caution.

Despite these differences in belief, it is clear that shooting stars have always had a powerful connection to the spiritual across many different cultures.

In addition, these beliefs always point towards something powerful occurring and a change is happening that is marked by a shooting star.

The General Spiritual Meaning of a Shooting Star

In today’s culture, the shooting star has remained an iconic spiritual figure.

People generally accept the fact that a shooting star can carry your wishes forward and give you good fortune.

This is likely connected to the fact that shooting stars are so rare!

Much like finding a four-leaf clover, seeing a shooting star automatically brings you luck.

Shooting stars can symbolize a coming change, both in the form of an ending and a beginning.

If you spy a shooting star and don’t have time to make a wish, don’t panic! After all, they present so much more than fortune.

Examine your life and recent events. Is there something you wish to find or that you sense is ending? If so, the shooting star is a sign that progress is being made.

In addition, shooting stars can manifest in your dreams!

If you notice a dream or recurring themes of shooting stars, these could represent your personal ambitions and desires. Your subconscious could be telling you to take the lead on a long-term goal that you have kept hidden.

Shooting stars in dreams can also be signs of a coming change, both good and bad.

Since they represent a connection to the heavens, shooting stars in dreams are often signs of an unexpected change approaching, perhaps a promotion at work or even the reappearance of an old friend in your life!

After dreaming about shooting stars, try to visualize your goals and the best way to approach them. Be sure to also take note of any sudden changes in your life.

Utilizing the Spirituality of a Shooting Star

Shooting stars definitely represent good fortune and change, but they are omens – the initiative must be led by you if you want to use the power of a shooting star to manifest your own luck and changes in your life.

If you happen to randomly see a shooting star, make a wish and remember it! Think back on your own life and if there are stirrings of any big changes sure to occur that the shooting star symbolizes.

Stargazing in a special site far away from cities and light pollution will increase your chances of seeing a shooting star. If you are hoping for clarity or potential good fortune, consider going out and stargazing while reflecting on your desires and your life. With any luck, you’ll see some shooting stars!

READ THIS NEXT: Spontaneous Kundalini Awakening