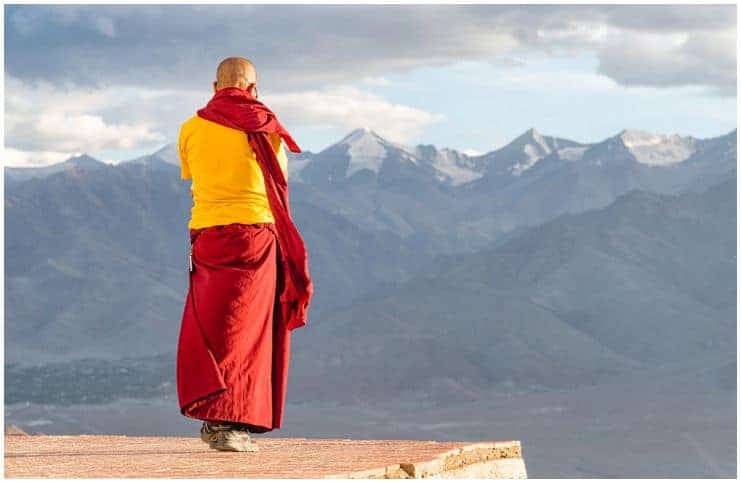 The Yoga of Psychic Heat (or Inner Fire), pronounced Tummo, whereby a tremendous psychic force is produced; it also has a valuable side effect, namely, the generation of physical warmth.

This practice originally derives from Indian Vajrayana tradition, including the instruction of the Mahasiddha Krishnacarya and the Hevajra Tantra.

In the present day, monasteries maintaining an extensive practice of tummo are quite rare and located mostly in the remote Chinese provinces of Sichuan and Qinghai.

The word signifies heat, warmth, but is not used in the Tibetan language to express ordinary heat or warmth. It is a mystical terminology.

Though this yoga is sometimes valued for its subsidiary effect, which is a great advantage to hermits suffering the rigors of a Tibetan winter in unheated caves, the real purpose is to achieve a state of unequaled unity and completeness in which all the forces of the adept’s being are concentrated and integrated.

At the outset, he must accustom himself to doing without thick clothes or a fire to keep him warm; and he must also observe strict sexual continence, since the transmuted sex energy is one of the main sources of psycho-physical heat.

The practice frequently takes years to master and is usually perfected in solitude.

How To Do Tummo Meditation?

The method used is a form of Hatha yoga combined with a Sadhana including visualizations and breathing exercises.

The prime object of visualization is the letter A that the adept, by controlled respiration and intense mental concentration, causes to blaze with heat and turn into a flame that fills his body and then expands to fill the universe before contracting and disappearing into the Void.

When he has become proficient, the adept can break his solitude and practice tummo where and when he likes.

To test his success, his spiritual teacher may require him to sit naked on the mountainside throughout a cold winter’s night, during which he must dry sheets dipped in icy water one after another by wrapping them around himself and subjecting them to the blaze of his inner heat.

Alexandra David-Neel speaks of competitions among newly qualified adepts who vied with one another to dry as many icy, dripping sheets as possible between late evening and sunrise.

Another test is to measure the quantity of snow that melts under his body.

A 1982 study of the physiological effects of this spiritual practice has been made by Benson and colleagues, who studied Indo-Tibetan Yogis in the Himalayas and in India in the 1980s.

Conducted in Upper Dharamsala in India, it found that the subjects, 3 monks, exhibited the capacity to increase the temperature of their fingers and toes by as much as 8.3 °C.

In a 2002 experiment reported by the Harvard Gazette, conducted in Normandy, France, two monks from the Buddhist tradition wore sensors that recorded changes in heat production and metabolism.

A 2013 study by Kozhevnikov and colleagues showed increases in core body temperature in both expert meditators from eastern Tibet and Western non-meditators.

If you really want to learn and practice it in a meaningful way, you need direct instructions from a teacher. To engage in it without direct instruction can actually cause severe physical and mental disturbances.

It is a complicated and rather advanced yogic practice.

The book by Lama Thubten Yeshe is to help to remind you of the details taught by the teacher, it cannot replace the teacher.