The Kalachakra Mantra is considered a sacred chant.

It is also referred to as the “Tenfold Powerful One.”

It has been preserved in India and Tibet for more than 2,500 years.

According to experts, the purpose of reciting the mantra is to build a connection to the deity you are chanting to.

There are two forms of the Kalachakra; the mantra and tantra.

Tantra is a larger text that gives exact details and instructions for a spiritual practice.

The Kalachakra Tantra is said to help purify the body and mind.

The Tantra is typically reserved for monks and other serious Buddhist practitioners after a period of initiation. This time allows them to prepare for their quest into Buddhahood.

However, the current Dalai Lama the 14th has given the Tantra to tens of thousands of people at one time.

Something that is controversial amongst some who practice the mantra and tantra.

The Dalai Lama believes these large initiation practices benefit those who are not even in attendance because of its good karmic influence on the world.

The Kalachakra is also used in the sacred sand mandalas of the Buddhists.

Monks will spend weeks or months painstakingly constructing huge circular artworks or mandalas made only of colored sand. 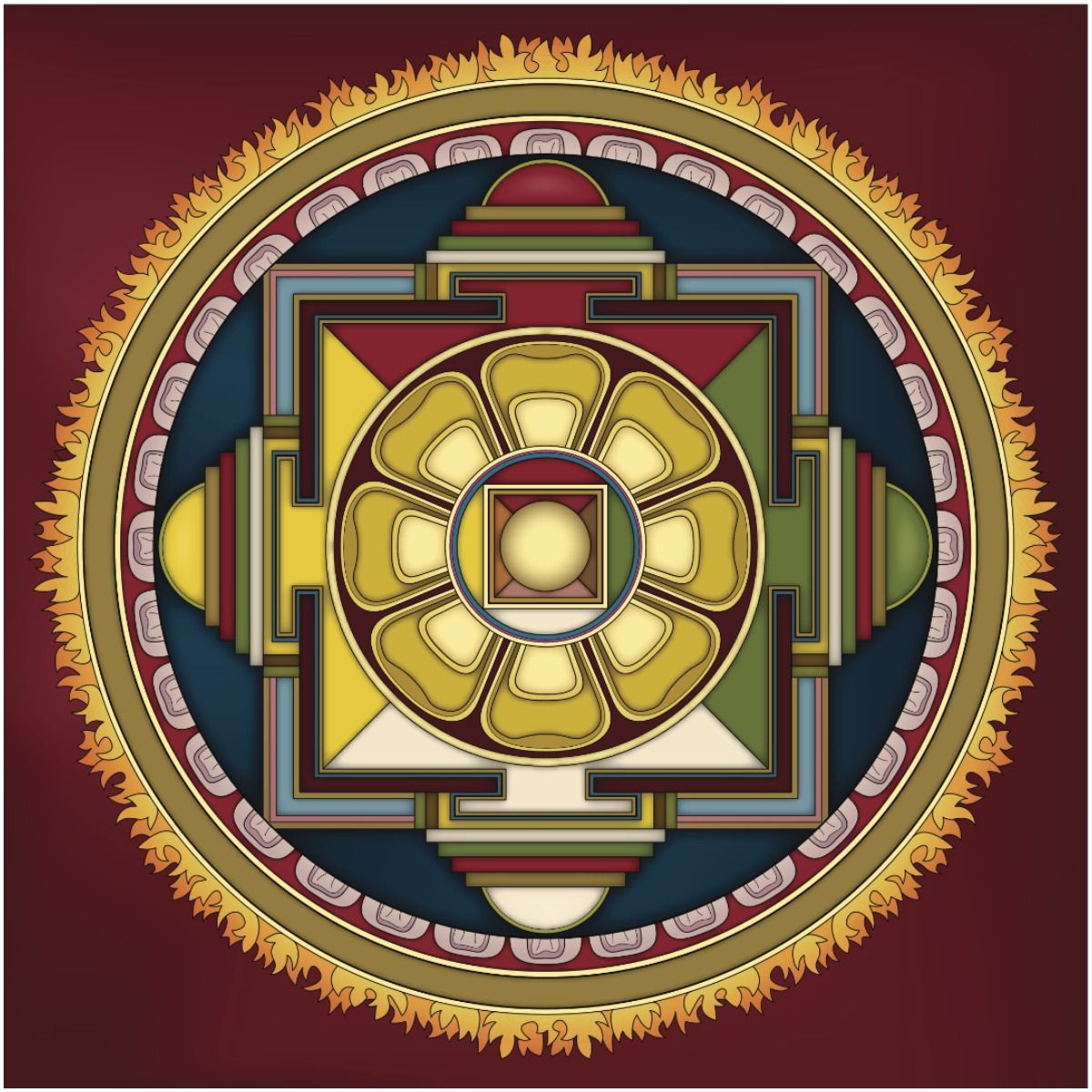 The Kalachakra sand mandalas contain all 722 deities within the beautiful mandala.

These stunning mandalas are destroyed by the monks in a systematic fashion, with each section being removed in a very specific order.

The sand is then collected in a jar and released back into nature.

This is usually done by being poured into a body of moving water, like a river.

This ritual is to remind observers that life is not permanent.

Kalachakra adds another layer to this meaning by symbolizing the permanent cycle of change, with the belief that death and rebirth are the most pervasive life cycles.

The Kalachakra Mantra ancient symbol is made up of seven syllables surrounded by a ring of fire.

The Kalachakra Mantra is a combination of syllables that is believed to create a line between the practitioner and the divine to whom they are chanting.

The mantra has both meaning and color associated with each portion.

La – the element of earth (yellow)

Wa – the element of water (white)

Ra – the element of fire (red)

Ya – the element of air (black)

HAM and KSHAH are the bija syllable for the father Kalachakra (HAM) and his cohort Vishvamata (KSHAH).

The syllable MA is the basis for the mansion of Kalachakra.

The syllables LA VA RA YA represent the 4 elements of wind, water, fire, and earth.

HUM PHAT signifies an offering of blessings, with the wish that hearing this mantra and chanting it brings supreme benefit for all sentient beings.

This tantra is centered around the concept of time, such as the cycles of the planets, the cycle of our own breath, and the various cycles in our bodies and lives.

READ MORE: 11 Most Popular Tibetan Buddhism Mantras With Their Meanings 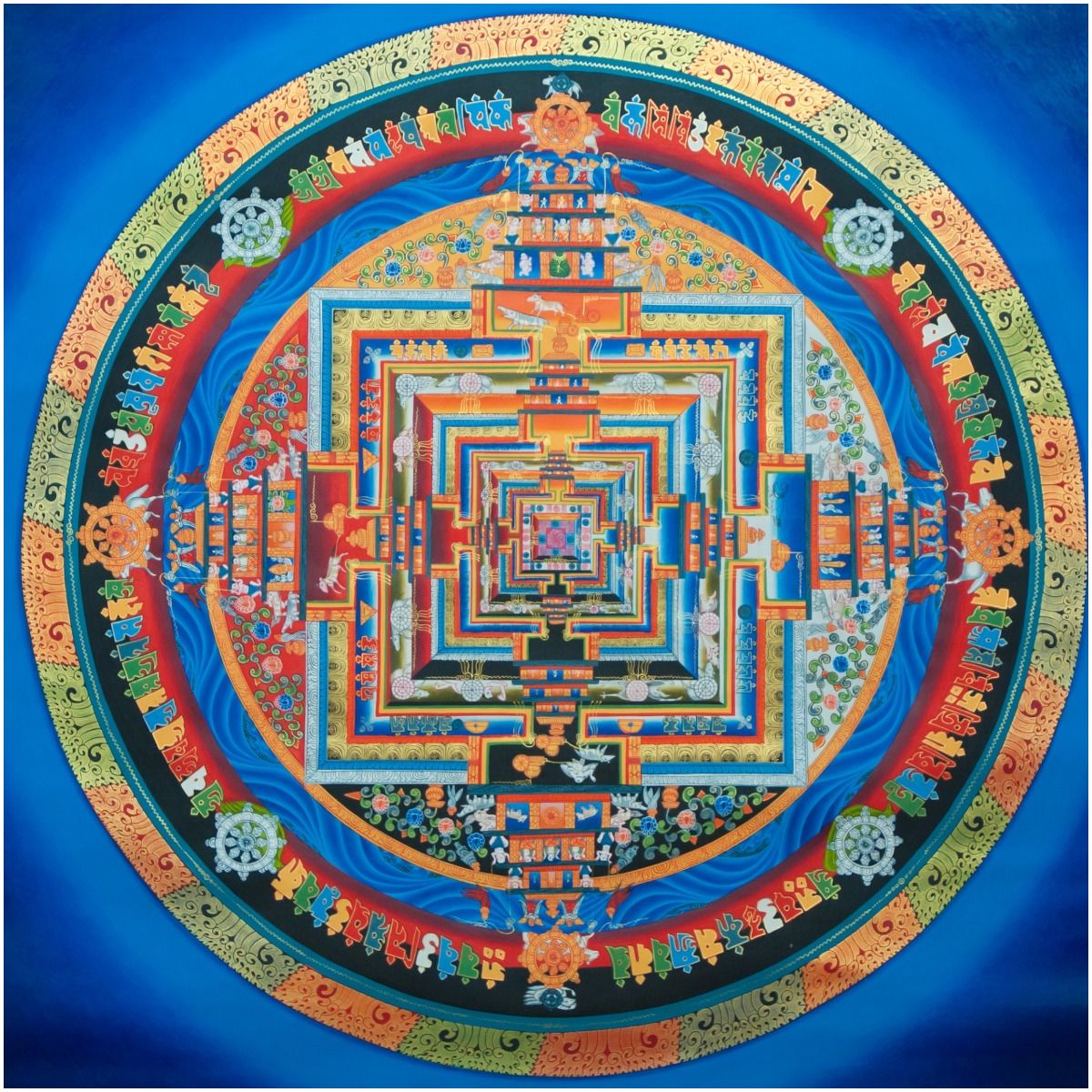 The benefit of the Kalachakra Mantra is to transform one’s own gross, physical body into a luminous form that is devoid of both gross matter and the subtle body of pranas.

Transforming your own mind into the enlightened mind of the immutable bliss occurs in response to the material transformation.

The immutable bliss is also described as the union of wisdom and method, or emptiness and compassion.

The actualization of the transformation is believed to be the perfect, full Buddhahood.

This is in the form of the Supreme Primordial Buddha, Kalacakra, who is omniscient.

This is considered the true nature of one’s own mind and body.

The supreme imperishable bliss is defined as peace and pervades the bodies of sentient beings and the entire world.

The Kalachakra Mantra is often used when it is believed that the world is in a desperate state, in need of a strong intervention.

Overall, the Kalachakra is believed to pacify conflict and develop peace and welfare.

This will, in turn, reduce suffering and increase love, joy, happiness, compassion, and kindness.