The Ashtamangala is a sacred group of Eight Auspicious Signs. These eight symbols are central to the study of Tibetan Buddhism. They are found all over Tibet and in exile communities.

In Buddhism, these eight symbols of good fortune express the offerings made by the gods to Buddha Shakyamuni immediately after he gained enlightenment. Each one represents one aspect of the Buddha’s teachings.

”Putting these eight auspicious signs around all over, outside and also inside the rooms, makes things very auspicious. It is not mandatory to put all 8 together, and they don’t all need to be in the same place.

They can be placed separately at distinct locations, but you should have all the symbols.”

The Ashtamangala – The Eight Auspicious Symbols Are As Follows:

The Precious Parasol signifies the beneficial activities of keeping beings from the harmful forces, harms of illness, obstacles, and so forth.

It also signifies the enjoyment of a feast of benefit under its cool shade.

The Victory Banner signifies the victory of the Buddha’s teachings over ignorance, death, disharmony, and all the negativity of this present world.

Additionally, it signifies the victory of Buddhist doctrine over all pernicious and harmful forces. 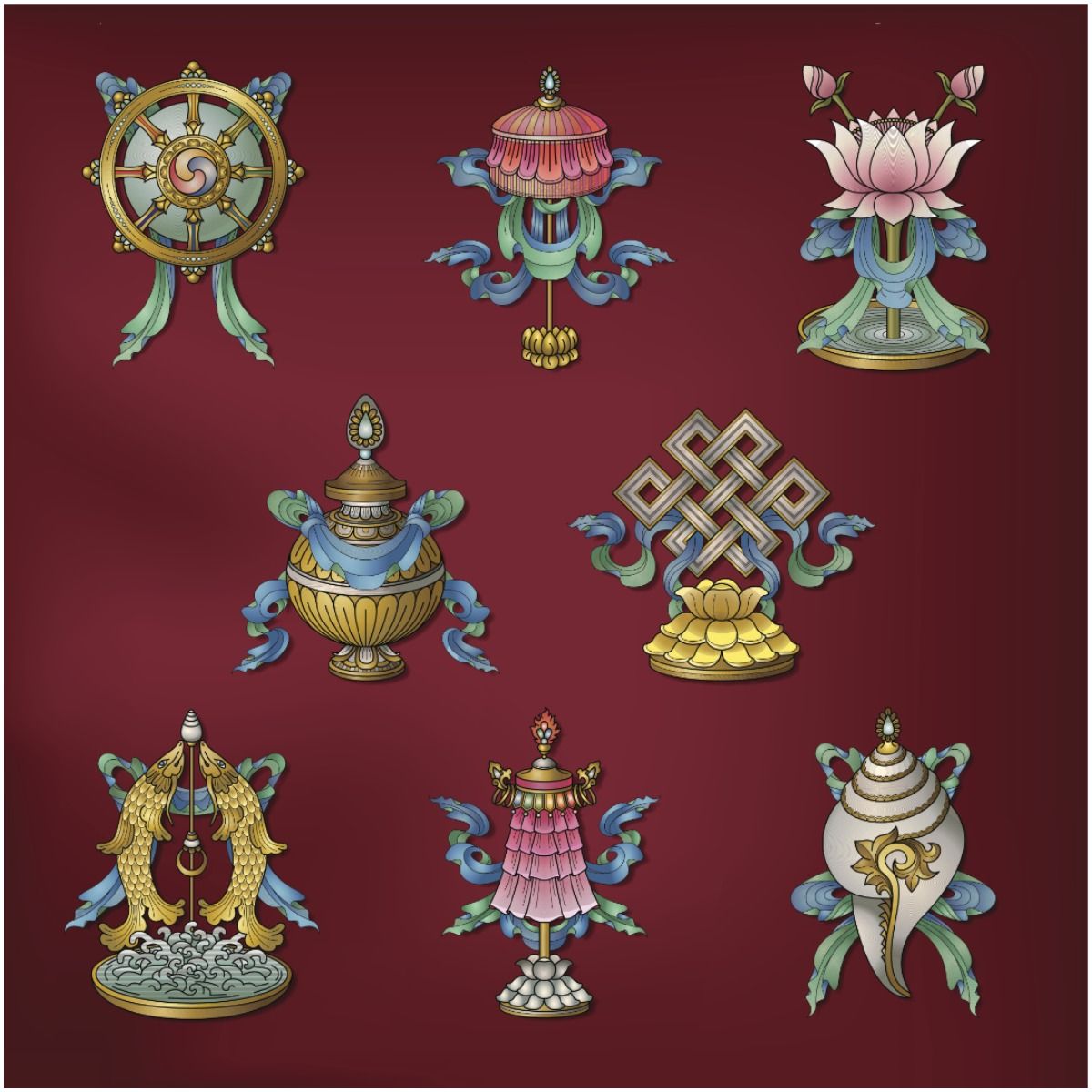 The pair of fishes originated as an ancient pre-Buddhist symbol of the 2 main sacred rivers in India, the Yamuna and the Ganges.

They are traditionally depicted in the form of carp, which are usually regarded in Asia as elegant due to their shape, size, and longevity.

The Dharma Wheel or Golden Wheel signifies the auspiciousness of the turning of the precious wheel of Buddha’s doctrine, both in its realizations and teachings, in all realms, and at all times, enabling sentient beings to experience the bliss of wholesome deeds and liberation.

The Endless Knot is a geometric diagram that signifies the nature of reality where everything is interconnected and only exists as part of a web of negative and positive karma and its effect.

Having no beginning or end, it also signifies the infinite wisdom of Gautama Buddha (also known as Shakyamuni Buddha) and the union of wisdom and compassion. Also, it signifies the illusory character of time and long life as it is endless.

The lotus is important in many Buddhist traditions and is one of Buddhism’s most recognizable symbols of enlightenment.

It signifies the complete purification of the defilements of the mind, speech and body, and the full blossoming of wholesome deeds in blissful supreme liberation.

In Buddhist art, a closed bud represents a time before enlightenment, while a fully blooming lotus flower signifies enlightenment. Also, the muddy waters represent the struggles of life.

In addition, Lotus Sutra is one of the most important texts of Mahayana Buddhism. In it, Gautama Buddha expounds the ultimate truth of life to which he was enlightened.

The Treasure Vase signifies an endless rain of long life, prosperity, wealth, and all the benefits of this world and liberation.

It is also known as the „vase of inexhaustible treasures and is a sign of the inexhaustible riches available in the Tibetan Buddhist teachings.

READ THIS NEXT: What is the Significance of 108 in Buddhism?