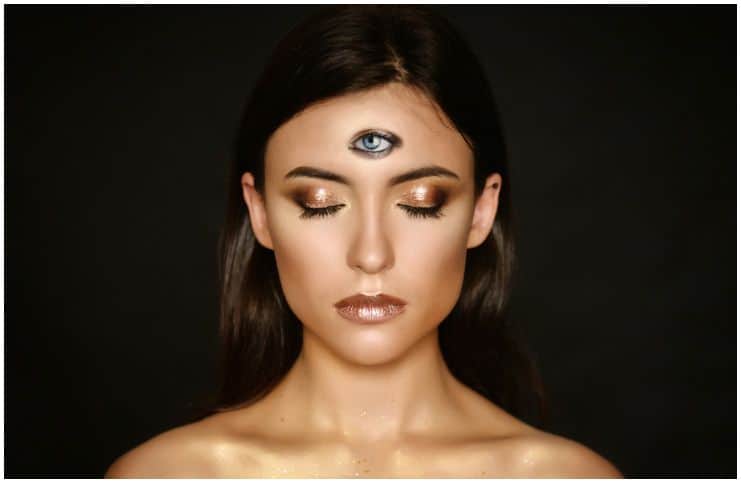 Mudra means gesture or seal. Basically, it is a way of directing energy and enhancing our asana practice, meditation or pranayama. It essentially involves gazing at the eyebrow center.

Shambhavi mudra, also called Bhairavi mudra or the Eyebrow Gazing mudra, is described in many texts, including Gherandha Samhita, Hathapradipika, Vijnanabhairava Tantra and Amanaskya Yoga. In laya yoga, this is defined as a pratyahara technique, i.e. it leads to sensory withdrawal.

How To Practice Third Eye Mudra?

SHAMBHAVI MUDRA MEDITATION Some benefits of practicing Shambhavi include increased focus, centeredness, relaxation, intuition, higher state of consciousness, & living in the moment. You could meditate in just this way for the rest of your life. And it does no damage to your eyes. In fact, it helps strengthen them. Here are some tips: 1) Tilt your head back slightly 2) Close your eyes first. Turn eyes inward before looking upward 3) Look at the center of your forehead or your third eye and keep your concentration there 4) Have patience 5) Practice every day 6) If your eyes are sore, this is normal 7) You shouldn't see anything because your eyes are rolled up and inward 8) Take a picture to make sure your eyes are completely white Note: I have seen two ways to do this. This is just one way of practicing @masterofearth @damoh_nature @onsomethirdeyeshit #shambhavimudra #yoga #meditation #health #eyes #mudra #shambhaviyoga #nature #relax #intuition #consciousness #training #focus #strength #happiness #peace #innerpeace #truth #life #joy #fun #meditate

People suffering from glaucoma, cataract surgery or eye operations should not perform this mudra.