Great Treasure Lord, Noble Dzambhala, You are the Lord of Precious Treasures, Having Power over riches, rain, precious rain; Give me, the yogi, the blessing of accomplishing wealth. Effortlessly, desireless, The Wisdom Jewel, Wish-fulfilling Tree, Fulfills the hopes of all sentient beings. May all wishes be auspiciously accomplished!

The Meaning Of Yellow Dzambhala Mantra

“Dzambhala” means “Precious Golden Deity, who gathers or brings the wealth of spirituality or Dharma and material security or accomplishment to our lives.”

Jambhala (otherwise known as Dzambhala, Dzambala, Zambala, or Jambala) is the God of Wealth and appropriately a member of the Jewel Family (see Ratnasambhava). In Hindu mythology, Jambhala is known as Kubera. 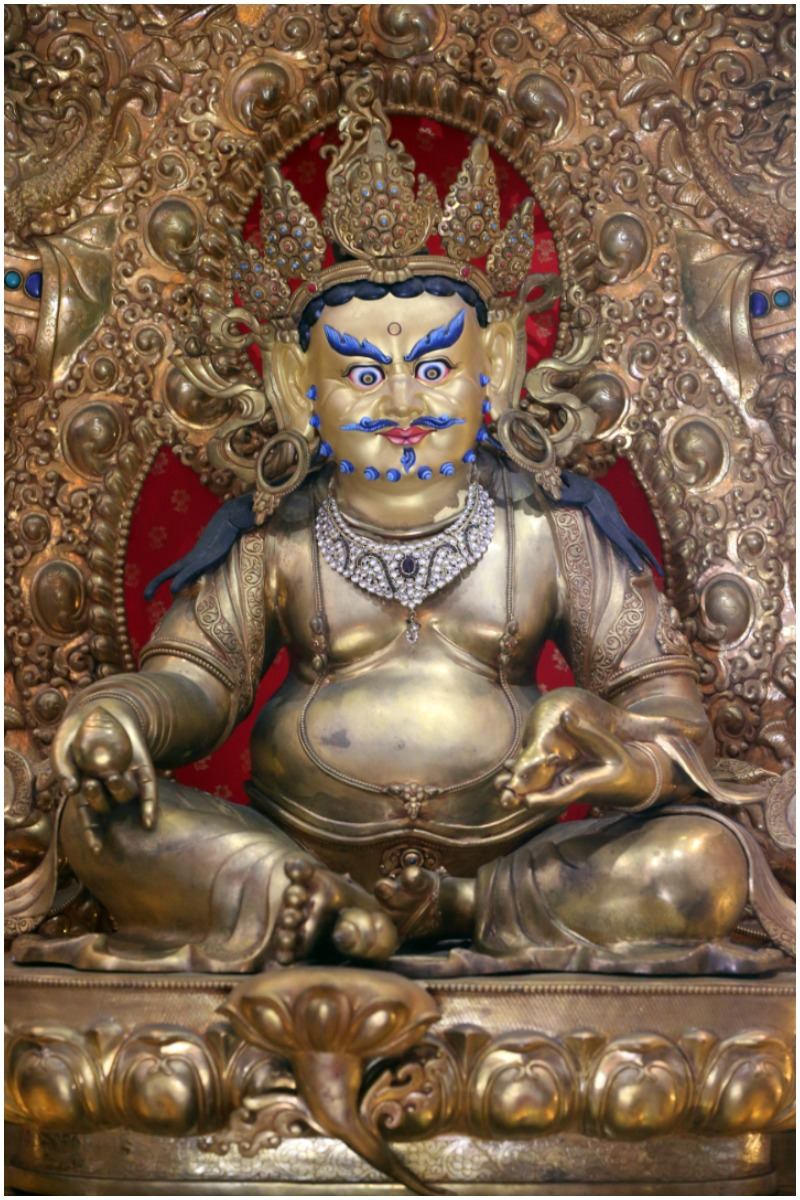 Jambhala is additionally believed to be an emanation of Avalokitesvara or Chenrezig, the Bodhisattva of Compassion. There are 5 different wealth Jambhala, each has their own practice and mantra to help eliminate poverty and create financial stability.

Gyalten Sogdzin Rinpoche said that Jambhala is the defender of all Lineages and of all sentient beings from all sickness and difficulties. Jambhala is a Bodhisattva of material and spiritual wealth as well as many different things, especially of granting financial stability.

”Because in this world, there are all kinds of wrathful and negative emotions or bad spirits, and sometimes they will harm you and other sentient beings, he must take on such a wrathful and powerful form to shield us from these harmful spirits and negative karma.

Especially, he helps us minimize or decrease all misfortunes and obstacles and assists us in increasing all good fortune and happiness.”

The 5 Jambhalas are the manifestations of the compassion of Buddha and Bodhisattvas to guide sentient beings along the way to illumination. They have the essence of generosity and represent the activities of increasing benefit. Their aspirations are to help the poor and those suffering from ill fortune.

The most renowned one is Yellow Jambhala. Some say that he is the most effective one. Yellow Jambhala is pictured as a round or plump male Bodhisattva. He usually has ornaments typical to that of the Bodhisattvas. His Buddhist practice, ceremonies, and mantras are said and done particularly for the purpose of gaining wealth.

The Tibetan legend said that a venerated high Lama, Atisha, was walking alone when he found a man starving and near death. After looking around and unable to find food for the old man, he cut flesh from his own body and offered it to the starving man.

But the man refused to eat his flesh. Being discouraged and not knowing how else to help the man nearing death, Lama Atisha sat down next to him. At that point, there was a blinding bright white light, and before Atisha appeared Chenrezig of Compassion.

He told Lama Atisha that he was going to manifest Himself as the God of Wealth, Jambhala, and guarantee that those in poverty would suffer no longer.

It’s viewed as auspicious to invite the image of the Yellow Zambala in your home or office.

Every morning, you can also pour some freshwater on top of the head of Yellow Jambhala with your right hand while you chant his mantra seven or twenty-one times.

All gurus must first teach their followers to forgive and forget first before they can expect even a small morsel of blessing from any of the five Dzambhalas.